The ... and Tubes is a weapon that appears in Dead Space 3. This weapon can be built at a Bench after finding the blueprint.

A stasis-amplified Galvainzer and Force Gun, modified to slow enemies down with each shot.

The blueprint for this weapon can be found during Chapter #.

This section is still under-development. More information will be added soon. Ammo: 45 upper and 20 lower.

The upper tool of ... and Tubes consists of a Military Engine with a Directed Suspension Field tip (Galvanizer). This produces a burst-fire submachine gun.

The lower tool of ... and Tubes consists of a Plasma Core with its Default Tip (Force Gun). This produces a kinetic shotgun with knock-back energy. 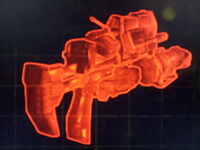 As it appears when you are unable to construct
Add a photo to this gallery
Retrieved from "https://deadspace.fandom.com/wiki/..._and_Tubes?oldid=149480"
Community content is available under CC-BY-SA unless otherwise noted.