The 711-MarkCL Rivet Gun is the latest refinement from Timson Tools' long line of friendly tools. Thanks to the latest in machine action loading, the Rivet Gun is designed to fire as fast as you can pull the trigger. This allows for quick multiple rivets during narrow windows of alignment in tricky Zero-G maneuvers. Minimized kickback and electromagnetic shielding provide safe, hot rivets in even the most delicate, or dangerous, of environments. Good for temporary patch jobs or heavy duty hull repairs, this little workhorse will get you back to the stars in no time. Remember, safety should be on unless in use, and never point live mining tools at people or ship membranes.

The 711-MarkCL Rivet Gun appears in Dead Space 2 as a pre-order exclusive from Gamestop and was later included in the Supernova Pack. As revealed in the Gamestop trailer for the Rivet Gun, it is a rapid fire weapon that can pin Necromorphs to walls. The primary fire shoots almost as fast as you can pull the trigger and the secondary fire detonates up to five of the rivets currently fired out of your gun and makes them bounce off the walls of the room you are in. The rivets are also relatively inexpensive at the store. It has a default of 16 rivets per magazine and a maximum of 24.

When in the inventory, it seems to affect item pickups in a way that favors the Rivet Gun, in that the odds of collecting an abundance of rivet ammo as opposed to ammo for other weapons seems to be high which may be intended to compensate for the Rivet Gun's high ammo consumption and low damage.

The Rivet Gun can be crafted in Dead Space 3 with the right parts, but this time the Explosive secondary function discharges ALL fired rivets instead of only five, but deals a lot less damage compared to the previous version. 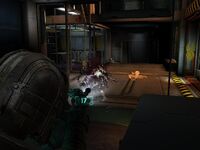 The Rivet Gun in Dead Space 2 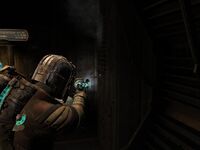 A single rivet stuck in the wall

Concept Art for the Rivet Gun

Concept art of the Rivet Gun from Dead Space 3