The Advanced Soldier RIG is a military-grade RIG that was issued to the Earth Defense Force personnel. The RIG featured the built-in Stasis and Kinesis modules.

The Advanced Soldier RIG is a fatigue and body armor assembly that was designed for combat use and is standard issue protective wear for the EDF Marines and Sailors.

The assembly is composed primarily of dark grey, vacuum-rated fatigues bearing a number of utility pockets and white body armor plates including armored boots, a cuirass, cuisses, spaulders, rerebraces, vambraces and a head-enclosing combat helmet. The left spaulder of the suit is replaced with what can be speculated as lighter armor plating to allow faster movement of the left arm during reloading or other tatical situations, this provides no in-game bonuses to reload speed however.

The breastplate bears an insignia representing the Earth Defense Force. 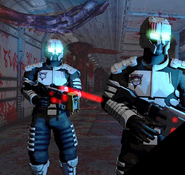 Concept Art for the RIG.

A close front view of the RIG.

Backside of suit. Note how the RIG is not directly attached to the spine area of the suit.

A wounded marine wearing the RIG.