The Advanced Suit is a state-of-the-art suit used by elite combat teams. Like the other suits in Dead Space 2, thrusters are located on the legs and clavicles and also includes a separating, folding helmet. The Schematic of this suit is found in Chapter 11, in a Power Node storage room shortly before Isaac is attacked by Nolan Stross. It offers 25 inventory slots and 20% armor, and gives a passive bonus of decreasing the recharge time on your Stasis Module by 50%.

This suit relies on highly classified technology and is intended for elite forces operating in dangerous situations and the harshest of environments. Like all other full-body vacuum-rated suits, the Advanced Suit is self-sealing, meaning that it will seal itself if punctured or otherwise damaged in a manner which compromises the wearer's exposure. This allows operators to work in the vacuum of space or other similarly hazardous environments.

The suit costs 40,000 Credits at the Store, or 36,000 with the Vintage Suit on. The Advanced Suit has a special feature that halves Stasis recharge time, further enhancing the lethality of the Advanced Suit. It is the best suit available in the first playthrough of Dead Space 2.

As seen in Dragon Age 2. 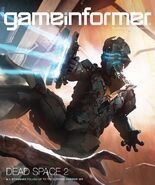 Concept art and schematics overview of the Advanced Suit.

The Health holo-meter of the Advanced Suit.

Isaac defending himself against a member of the pack.

The back of the RIG, showing the yellow health bar.

Close up view of the Advanced Suit's Helmet 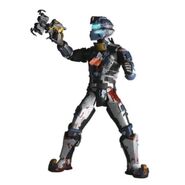 Isaac being attacked by a member of the Pack in the Advanced Suit. 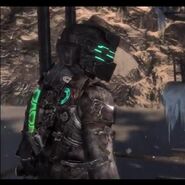 The Advanced Suit, as seen in Dead Space 3 promotional content.

Advanced Suit Render.
Add a photo to this gallery

Retrieved from "https://deadspace.fandom.com/wiki/Advanced_Suit?oldid=152917"
Community content is available under CC-BY-SA unless otherwise noted.