Alexis Stross was the wife of Nolan Stross. She appeared in Dead Space: Aftermath.

Alexis joined the crew of the USG O'Bannon along with her husband Nolan and their infant son. Alexis was said to be constantly stressed, arguing with Nolan over their crumbling marriage. She was ignored by Nolan, who claimed that she was ruining the only few minutes that he could spare with her and his son.

Alexis pointed out her suspicion of him having an affair with Isabel Cho. Nolan denied this, telling his wife that he brought them with him so they could be together, which Alexis countered by telling him that she only came because she nagged him to take her. Nolan stubbornly left Alexis to comfort their crying son.

Later on, a hallucinating Nolan Stross entered their suite to protect her and their son, only to see the both of them as creatures. Nolan first killed his son, and Alexis, horrified, screamed at him that he was attacking their child and pleaded for him to stop, only to be attacked in return by her hallucinating husband. A grievously wounded Alexis weakly asked why, only to be smashed across the head, killing her. Cho walked in to see the horror that had just unfolded, but Nolan simply stated that his family was alive and safe and he had only killed two monsters that were going to hurt them.

Stross was haunted by hallucinations of his dead wife and son, often saying that they were watching him. Stross also somewhat believed that they were still alive.[1][2] 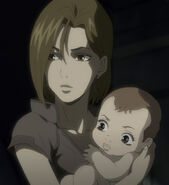 Alexis with her son.

Nolan hallucinating Alexis as a Necromorph.

Alexis and her son after being killed by Nolan.