"Move move! He's on the wall above - WHAT THE FUCK IS THAT!"
—A Unitologist Solider just before getting killed by an Alien Necromorph

The Alien Necromorph is a Necromorph created from members of the nameless alien species native to Tau Volantis.

A Necromorph variant of the mysterious alien species once native to Tau Volantis, these menacing, strong beasts stand around 7 to 8 feet tall (a little over 2 meters tall) and are very similar to Brutes in overall size, appearance and behavior and are possibly the Brute variants made from the extinct natives. They have two appendages on the chest.

They replace Brutes and Tripods from Dead Space and are first encountered on Isaac's descent to the underground city in Chapter 16.

One notable characteristic of this Necromorph is the eerie, high-pitched whistling sound it produces while attacking; this sound is derived from the resonating chambers known to be possessed by its alien host.

Brutes are the most commonly encountered variants of these Necromorphs. As stated before, they are almost identical to their uninfected selves, but have their bellies burst open, which are used to spew their recombinated offspring at their prey and presumably have other notable changes that are unfortunatly indistinguishable from the non-infected mummified corpses of the natives.

Along with the smaller Necromorph variants, the oldest and biggest of the natives were reformed into various Hive Mind forms, similar to the one encountered on Aegis VII, capable of redirecting the Marker signal and posing as mobile command centers enhancing the lesser Necromorphs' intelligence.

Among the surviving speciments is the one that the Sovereign Colonies research teams would name the Nexus. It has a stomach, eyes, and Nests inside of it. These are usually filled with enhanced Feeders that have been eating at their insides to make themselves stronger.

These are offspring of an alien brute. They take the place of the brute's ranged attacks in Dead Space 1 & 2. They make squeaking and high pitched alien noises. Their only attack is to attempt to surround the player and then inflict damage by exploding, similar to a Crawler.

Concept art of Rosetta, the Tau Volantis natives and the Necromorph variant of the aliens.

Alien Necromorph in the elevator shaft leading to the Alien Machine. 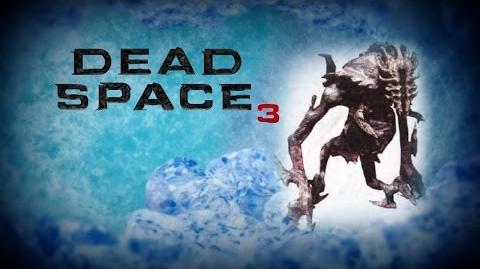