The Arctic Survival Suit is a specialized RIG introduced in Dead Space 3 designed for extremely cold environments. The suit is acquired by Isaac, and subsequently by John Carver, after replacing his damaged suit. There is also a re-skinned iteration as a promotional suit to be given to anyone who pre-ordered the Limited Edition of Dead Space 3  known as the "'Witness' Suit."

The suit is a gray-ish beige color, with a collar fashioned to look like that of a snowsuit. The extremities of the suit are heavily padded to insulate heat from within for the wearer, though not enough to restrict movement. A cloth mask is strapped over the mouthpiece of the helmet; it is unknown what purpose this serves although it is likely for extra heat insulation. Woven with classified S.C.A.F (Sovereign Colonies Armed Forces) synthetic fibers, it protects the wearer from the harsh climate of icy planets such as Tau Volantis. The fur-like synthetic fibers can be seen on the collar area of the suit. John Carver and Isaac Clarke have similar suit designs, the primary differences being the helmet and coloration. 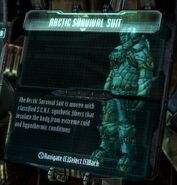 Isaac wearing a variation of the Arctic Survival Suit.

The Suit as it appears in promotional material 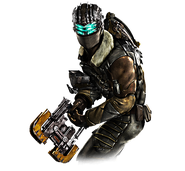 Isaac in the Arctic Survival Suit in Playstation All Stars Battle Royale.

Render of Carver's version of the suit.

Add a photo to this gallery
Retrieved from "https://deadspace.fandom.com/wiki/Arctic_Survival_Suit?oldid=151653"
Community content is available under CC-BY-SA unless otherwise noted.