"It's not the dying that scares me. It's not making a difference before I do."
—Austin[1]

Austin Buckell was a member of Ellie Langford's team and a Marker research team known as "Marker Ops".

He was recruited years ago from the EarthGov Corps of Engineers into the Marker Ops program. He was a veteran in dealing with the other isolated Necromorph outbreaks. He had a unique knowledge of the Marker Ops program and military history, specifically with the Sovereign Colonies Armed Forces. During the Necromorph outbreak on Keyhole Station, he and Santos' group rescued Ellie from a swarm of the creatures after she was separated from Robert Norton and John Carver.

Realizing that Jacob Danik's bombardment and attack of the station would continue, he joined Ellie on her mission to Tau Volantis to search for solutions.[2] Thirteen days after their departure from Keyhole Station, Buckell and the others are found hiding inside the CMS Roanoke. Buckell and Santos, however sustained injuries, most likely from the damage sustained by their destroyed ship or Necromorph encounters. During the repair of the CMS Crozier, Buckell assisted Isaac Clarke in numerous optional missions to recover spare parts and weapons.

Once the shuttle was repaired, the group attempted to re-enter the planet's atmosphere using a recovered flight path. The shuttle took heavy damage on re-entry of the planet and was split in half.

A wounded Isaac found Buckell alone at a waystation. He explained to Isaac how he volunteered to stay behind as there are no more Snow Suits, cautious of what might be below the bunker to check for another. Moments later, Buckell succumbed to his wounds and hypothermia. Buckell's death made him one of the only victims in the Dead Space universe to die a relatively peaceful death. Even when the Waystation was returned to, Buckell's body would still be sitting there and not transformed into a Necromorph.

Frostbitten Buckell before his death 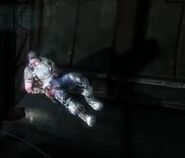