The Bench is a device found in numerous areas in Dead Space, Dead Space 2 and Dead Space 3 that can be used to upgrade various equipment. It is considered to be a "Nanocircuit Repair" machine. The player uses special "Power Nodes" to upgrade his tool or weapon on the classic Bench variants but on Dead Space 3, the Nodes are replaced with resources.

Upon finding a Bench, Isaac can upgrade any of the four weapons he is currently holding, as well as his Stasis or Kinesis modules, or his RIG. What aspect the player can upgrade differs according to the equipment you have chosen to upgrade.

Upgrade is done through an upgrade path. The player inserts Power Nodes into the branches of what they want to upgrade. However, Isaac can't simply place the nodes wherever he wants. To place a node, there must be an adjacent node next to where you are trying to insert a new one. The first node you place in a branch is pointed out by an arrow.

"That did it. And there's a Bench on the same circuit."
"A Bench?"
"With all the tools laying around here, I bet I can "make" a better weapon than this one."
"Ah, smart thinking."
—Isaac to Norton

In Dead Space 3, a new (or story wise ancient) form of the bench has been made that can allow the player to forge their own weapon or make a combination of two weapons, giving the new combined weapon a greater capacity to cause more damage. It also takes on some of the responsibilities of the Store as the user is able to craft items from health pack to ammunition with material instead of purchasing with credits. This version of the bench also allows the player to place items in a safe for latter retrieval, this function was previously a part of the store.

This machine can be found across the S.C.A.F. colony on the Tau Volantis floatilla and planet-side. One of these machines can also be found on the Lunar colony of Earth, possibly due to the fact that the place is a slum and the old bench-tech is easy to access and purchase. For unknown reasons, this form of bench was replaced with the newer variant of that technology, except the user can no longer customize freely the look of the weapon or tool but could instead upgrade its abilities, damage, and other things.

Upgrades to R.I.G suits can no longer be performed at the bench, the Suit Kiosk is required for this instead.

In Dead Space 2 you unlock an ability at Chapter 7 called "Respec" that allows you to remove all the Nodes from one tool and return them to your inventory. These recovered Nodes can then be applied to other tools and equipment. The Respec process costs 5,000 Credits to perform.

You can completely restore your health at any time by using Respec on your RIG and then reapplying the Nodes in a Health upgrade. This can be done an unlimited number of times as long as you have the 5,000 Credits for each Respec procedure. It is the same cost that a medium pack and cheaper than a large med pack, so it is profitable if you are really low on health.

As regards weapons, "respec" allows to get ammunition thanks to the reload effect of upgrading CAP circuits. It doesn't look interesting at a first sight, but note that every variant of the same weapon you're holding will be impacted. If we do the Maths, supposing an empty magazine and every possible variant equipped with full CAP upgraded:

So, with DLC, you'll never have resource problems. 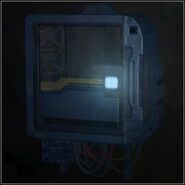 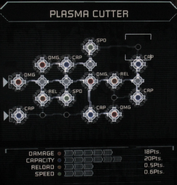 An example of weapon crafting in Dead Space 3.

The Logo of the Bench before it switches to the menu. 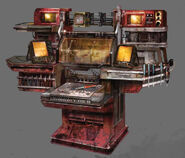 Concept art of the Bench from Dead Space 3.