Dead Space Wiki
Register
Don't have an account?
Sign In
Advertisement
in: Articles with Spoilers, Necromorphs, Aliens,
and 3 more
English

"You can kill the prophet, but you can’t kill the god! Your chance to warn the Earth has come and gone. We are coming. We are hungry. We are here."
—The Brethren Moons to Isaac Clarke and John Carver, Dead Space 3: Awakened

The Brethren Moons (Sometimes referred to as Brother Moons and Blood Moons) are gigantic, space-faring Necromorphs and the source of the Marker signal. They are believed to be the final stage in the Necromorph life cycle. Due to their agenda, the Brethren Moons are the central antagonists of the Dead Space franchise.

The Brethren Moons are a series of moon-sized organic lifeforms spread throughout the universe which consume all organic life they encounter, leaving entire star systems completely devoid of even the most basic microbial life.

The Moons reproduce by producing Black Markers, which travel through space. In the case of Earth, the Black Marker was carried inside an asteroid that struck the Yucatán Peninsula around 65 million years B.C. It is unknown if the Moons specifically target worlds that show promise for intelligent life as was theorized by the Unitologist leader Jacob Danik, or if the Markers are actually responsible for encouraging the evolution of intelligent species.

The Markers broadcast an electromagnetic signal that severely affects intelligent beings. This signal manifests either as dementia or as a compulsion to replicate the Markers through artificial means. This signal represents a source of seemingly limitless electromagnetic energy, which drives intelligent species to create Marker copies that are then inevitably distributed throughout their territory. However, the signal has another function: It can alter the necrotic tissue of dead organisms at the molecular level, causing corpses to reanimate and become Necromorphs; relentlessly hostile bio-recombinant creatures which then spread across the surface of the affected planet like a pandemic.

After a Necromorph infestation claims the majority of a planet's total population, the Markers on the planet initiate a Convergence Event, which can be seen as the “birth” of a Brethren Moon. Once the Convergence event begins, the flesh of all Necromorphs and any other dead tissue within the Marker's area of influence are flung into the stratosphere where they began to form into a new Moon. The Moon not only absorbs the biorganic material, but also planetary fragments, creating a kind of protective shell.[1][2]

The creature is only truly “born” when the creators of the new Markers are absorbed along with the planet's entire biosphere. Once the Markers are absorbed as well as a large portion of the biosphere, the Marker itself gravitates to the central heart of the Moon so that it can communicate telepathically with the rest of the network. It is currently unknown what happens to the Moon once it absorbs all of the life at its birthplace, but it is believed that the newborn Moon travels to the nearest source of organic life to continue feeding.

Earl Serrano speculates that all life between the origin of the Moons and humanity's home system has been extinguished by the Moons, mixing the countless species in their uniform biomass. The games proposed an uncommon answer to the Fermi paradox: Humanity never had the opportunity to contact aliens because a massive and lethally invasive species absorbed most if not all of the organic tissue that was within our galaxy, (and possibly beyond) leaving much of it in a state of "Dead space".[3] Serrano also discovered that the Moons formed a network that spanned the galaxy, which they used to communicate as the Markers' influence affected other sentient species, leading them to build more of Markers, continuing to expand the network.[4]

The Events of Dead Space 3[]

During the events of Dead Space 3, Isaac Clarke came to realize that the Markers are receiving a distress call from the incomplete Moon of Tau Volantis whose Convergence was interrupted when the aliens that it attempted to assimilate built a machine that flash-froze their entire planet. In response, the Moon began using the other Markers to broadcast a distress signal(Such as Make us Whole or Turn it Off) in the hopes of luring new organic beings to Tau Volantis so that they could disable the Machine, completing convergence and continuing the cycle of extinction.

The faux Markers that Isaac faced attempted to continue the "Brethren Chain" of Moons by circumventing the problem of the hibernating Tau Volantis Moon. He realized that if the Moon was freed, any location that was within the galaxy with a still active Marker would begin the ultimate Convergence by continuing its growth. Should the Moon complete itself, it would wake the other Brethren Moons up. Those that are heading for the Marker locations would devour all of the organic life that was present, resulting in the destruction of all of humanity and possibly all life in the Milky Way itself. In the final chapter, Isaac managed to reconfigure the Alien Machine, destroying the Tau Volantis Moon and causing all of the Markers to seemingly stop broadcasting, ending the danger to the galaxy at least temporarily. However, though the Tau Volantis Moon was incomplete, upon its awakening, it somehow managed to contact the other Brethren Moons. Upon its destruction, they woke up and they began converging on Earth which was the last source of human life in the galaxy.

"We are all awake now. Awake and hungry. But where is it? Take us home, Isaac. Make us Whole."
—The Brethren Moons "talking" with Isaac Clarke.

Following the destruction of the Tau Volantis Moon and their subsequent fall onto the planet below, Isaac Clarke and John Carver reawoke in a frozen crevice. Upon reaching the surface, the two men noticed the fallen Moon out on the horizon of Tau Volantis. Isaac believed that after the Moon's destruction, the Marker signal would cease and there would not be any more Necromorphs. When Isaac and Carver reached the nearest Suit Kiosk and Bench, they suffered from a brief vision from the Brethren Moons by realizing that the Necromorphs are still active.

The remaining Unitologist soldiers on Tau Volantis started to lose faith when the Moon was destroyed, believing that there would be no Convergence or rebirth. There was only death. However, a Unitologist fanatic heard a "Voice" from the awakened Brethren Moons, saying: "We are coming. We are hungry."

As his faith in Unitology was reaffirmed, the Circle member began to gather all of the remaining Unitologists into orbit into his new and fanatical cult of mutilation and sacrifice. Only a few Unitologists resisted, either mentally broken by the Moon's signal (Chanting the mantra, "They are hungry. They are coming.") or outright attempting to resist and escape from their insane and former brethren.

Isaac and Carver reached the Terra Nova and they are subjected to the painful visions of the Brethren Moons. Isaac who was suspecting that they are being manipulated into taking the ship back to Earth so the Moons could follow them there decided to destroy the ShockPoint Drive and trap them at Tau Volantis forever. Carver who was determined to recover the drive and return and seeing Isaac's growing paranoia threatened him.

The pair fought the Cult Leader after a tense hallucinatory confrontation by discovering upon his defeat that the Moons knew where Earth was and they turned Carver and Isaac against each other to prevent them from warning Earth in time. Knowing that they had little time, Isaac and Carver installed the salvaged ShockPoint Drive on the Terra Nova and they overloaded the ancient reactor of the ship to power it up by shocking out just before the ship broke down entirely.

Arriving at Earth, Isaac and Carver tried to contact the authorities (EarthGov and CEC) through several channels to relay their warning. Each time was met with static. After several tries, a transmission broke through: The gurgles and snarls of many Necromorphs. The two heroes are shocked to see the Brethren Moons rising from the other side of Earth and they are already scouring the surface of the planet with their tentacles. A Brethren Moon began to rise in front of the Terra Nova and the scene ended, leaving their fate unclear.

"The Earth draws near. Even now we can feel it. Teeming with life. Teeming with Markers. From each world we devour, a new brother will rise and be made whole. Our network will grow and we will live forever."
—The Brethren Moon about their nature.

The Brethren Moons are colossal Necromorphs and they are far larger than any other form that was previously encountered. The surface acted as a protective casing by concealing a writhing mass of tentacles that could reach thousands of miles in length. Within the midst of the tentacles, a circular maw that was capable of ingesting the massive quantities of the matter laid. Hanging at the entrance of the mouth was an irregular mass of tissue that was consisting of multiple eyes, tentacles, a fang-lined slit and a circular sucking mouth. This "Head" was capable of interacting with the smaller objects that are about to be ingested by breaking the raw materials down and engaging any stubborn living prey. It also had another far larger "Head" which was located at approximately the front and center of the organic portions of the Moon. This head had two colossal yellow eyes and two long and pointy protrusions on either side that resembled the lateral horns of a rhinoceros beetle.

The research notes from Dr. Serrano speculated that the Moons are drawn to the species that grew and spread throughout the galaxy and they became overpopulated and starved of resources. He speculated that this was how they discovered the Alien race of Tau Volantis who are an empire that was trillions strong once. However, the aliens are resourceful and they froze the entire planet with the Machine at the cost of their own lives.

This theory was backed up by the limitless energy that the Markers radiated by encouraging the species with a desperate need for resources and energy to focus on building more Markers across their systems. This would make the species less able to enact the quarantines effectively.

The Moons are sentient organisms and they are able to communicate via a form of telepathic signal as it was with Isaac and Carver. They are also capable of causing the hallucinations by using their telepathic abilities. During the hallucinations where they spoke to Isaac and Carver through their "Prophet" which was The Cult Leader, they displayed a kind of Hive Mind mentality by referring to themselves in the plural. The Moons appeared to regard themselves as invincible, omnipotent and divine by referring to themselves collectively as a "God". The Brethren Moons also seemed to speak rather politely and calmly which was a strong contrast to their general nature. They seemed to lack any empathy as they did not appear to be saddened or angered by the death of their own kind, but they showed frustration and anger toward Isaac after he defeated their Prophet.

The face of the Brother Moon of Tau Volantis

Isaac and Carver discover the Brethren Moons at Earth at the end of the Awakened DLC.

Depiction of a Brother Moon. 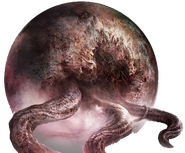 Moon crashed on the surface

A background painting concept of the crashed Moon before final render

Image flashed of a Moon in the Awakened trailer

The Moon crashed on the planet (as seen in the Awakened DLC trailer in reverse colors). 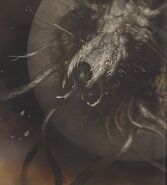 Concept art depicting the massive outer head of a Moon.

Brethren Moons as shown in hallucinations

A reference to the Brethren Moons in Dead Space 2