The Brute is a large Necromorph composed of multiple human corpses. It has heavy organic armor in its front and possesses extreme physical strength, making it a deadly foe in combat.

The Brute is almost entirely encased in an armored, spiked exoskeleton made from bone and calcified skin. Its posterior is relatively unarmored, and from it sprouts a pair of vestigial arms used for support if one of its main arms is cut off. The chest is a sack where the Brutes produce highly explosive organic material, made from the similar material as the yellow weakspots as well as a hole in the middle of the chest. The Brute bursts out these projectiles when its limbs are severed, not being able to attack properly.

Despite its heavy armor, the Brute is also quick for its size, able to even acrobatically leap through objects such as on the roof, similar to a gorilla or any ape. The Brutes use this tactic to silently approach its prey and take them by surprise, usually just landing on top of them, crushing them, but most of the time just landing to the ground and attempting to smash them with their strong paws. The Brutes appear to be so strong that they can even carve a long tunnel into solid metal, as seen in Dead Space 2.

The Brute attacks up close with a devastating punch and a headbutt that can easily knock Isaac off his feet. There are, however, specific weak spots just before the shoulder joints, and towards the back along both rear legs. They are easily identified by their comparatively bright yellow coloration. When attacked on the weak spots the Brute will contract within its armored plates to protect itself. This can be used as an advantage, for the back of the creature is still exposed and ripe for being blasted, and when combined with Stasis, serious damage can be done before the creature recovers. If one or both of the legs are severed, the Brute will be rendered completely immobile, but will actually resort to lobbing organic bombs from an otherwise rarely exposed hole in its belly.

Like many necromorphs, the Brute has an Enhanced form. It appears black, and is much stronger, requiring more ammunition to take down.

It is believed that the first Brute was created by the Earth Government using three human corpses and the genetic code of Necromorphs. Craig Markoff named the creature Krax, after one of the corpses used to make it, and used it to kill Michael Altman.

Normal variants of the Brutes are the most common ones to be encountered in the Dead Space games. They also get a slight appearance change in Dead Space 2, with their textures changed to be a bit darker and parts like the head being more symmetrical, a trait of possible evolution within the Necromorphs or just an outcome of different hosts.

Despite its size and strength, they can be easy to put down by targeting the yellow weakspots in the armpit or the back when the creatures stops charging or retracts into a defensive ball.

The normal variant can easily put down the player in just two hits on higher difficulties, so be careful!

Enhanced Brutes, like every other Enhanced Necromorph variant, are dark and black in their appearance with glowing red-yellowish eyes. They are much stronger than their normal counterparts and can take more damage, but still can be easy to put down with the right choice of weaponry and planning. A Contact Beam puts down the creature in just 4-5 shots to the armpits.

Only 4 Enhanced Brutes are encountered between Dead Space and Dead Space 2 (Including one in Severed). One in the USM Valor (which kills Hammond), one on the Aegis VII colony once bridge power is restored, one in the Government Sector of the Titan Station, and finally one in the hospital docking bay of the Sprawl.

"Your weapons can't punch through that thing's armor! Shoot it in the back, Isaac!"
—Zach Hammond[1]

Brutes serve as mini-bosses in Dead Space; they are resistant to damage and can kill careless players with ease. Brutes are often fought alone, so all attention should be paid on the creature and not the player's surroundings, unless looking for ammo and health.

Very early look of a Brute 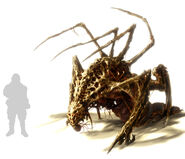 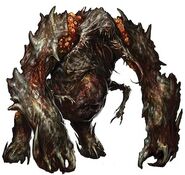 A picture of a Brute.

The finalized picture of the Brute in-game, opening up its chest to reveal its "bomb"-spewing hole.

Concept art of the Brute's face. 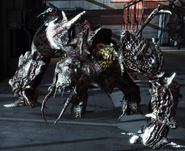 First appearance of the Brute in Dead Space. 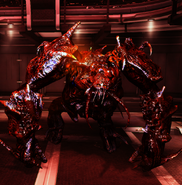 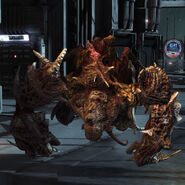 A picture of Isaac Clarke looking over his shoulder to find a Brute.

Brute leaping on the rooftop as seen in Dead Space: Mobile.

Brute leaping on the rooftop in Dead Space: Extraction. 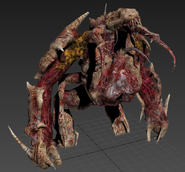