"A heavy-duty energy pulse device, the Contact Beam is used for commercial destruction where a powerful but focused explosive force is needed. The alt-fire delivers a ground clearing-blast around the user."
—Dead Space 2 Manual

The C99 Supercollider Contact Beam, also referred to simply as the Contact Beam, is a heavy engineering tool designed to pound and soften hard, raw minerals into smaller pieces.

Precious ores and minerals are sometime contained within large toughened rocks, which poses a problem to smaller mining equipment. That's where a C99 Supercollider Contact Beam comes in, it is designed specifically for splitting and obliterating tough materials and meteors, for easy extraction of the ore within.

The tool is immensely powerful and handy against tough enemies. However, the primary fire has to be charged for a short time until it can be fired.

Like the Force Gun, the Contact Beam is an energy projector that utilizes kinetic energy. As its name suggests, it is a miniaturized particle accelerator intended for mining operations.

To operate to its actual purpose, the Contact Beam needs to be charged for a brief period. When fully charged and fired, the Contact Beam delivers a huge kinetic discharge that obliterates anything it comes into contact. As such, the weapon trades speed and precision for damage.

The kinetic discharge is very powerful to the point where most Necromorphs can be killed in one shot, even prior to upgrades. If not charged, the Contact Beam acts as a simple short-range weapon. The Contact Beam's secondary fire acts much like the Pulse Rifle's (In the original Dead Space) where it unleashes a small radial ground-based shock wave that knocks objects away from the wielder.

Ammunition for the Contact Beam can be purchased in the Store for 2,000 credits for one shot. In Dead Space 2, the ammo is 4,000 credits for two shots, this means that contact ammo drops are worth 2,000 credits, making them the most valuable ammo drop in the game - and a good reason to carry it in your inventory at all times, as it causes the ammo to drop more often. Twenty slots filled with six shots each results in a whopping 120,000 credits if you choose to sell them.

As seen in Dead Space 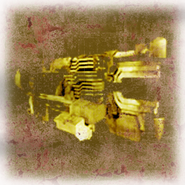 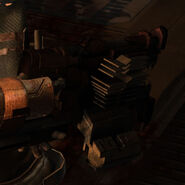 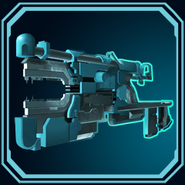 DS2 variant.
Add a photo to this gallery
Retrieved from "https://deadspace.fandom.com/wiki/C99_Supercollider_Contact_Beam?oldid=153067"
Community content is available under CC-BY-SA unless otherwise noted.