The CMS Greely was a Sovereign class research vessel that made up one of the ships in the orbital flotilla around Tau Volantis.

The CMS Greely was a research vessel that was a location in Dead Space 3 when Isaac was venturing to the CMS Terra Nova to repair the CMS Crozier. When Isaac ventured outside the CMS Roanoke, he began to pick up on a signal of an unknown origin: A looping message that was mentioning a code, "Papa Sierra". Jennifer Santos realized that the signal was being generated from the Greely and became an accessible location for Isaac.

Entering the Greely started the optional mission. Upon venturing into the Greely, Isaac met a problem which was a security lockdown locking most of the doors and a power outage. After turning the power on, Santos told Isaac that the lockdown originated from the Greely's radio room and after disabling the lockdown, an audio log revealed what caused the power outage and security lockdown. Doctor Barton was broadcasting the coded message to Tau Volantis, but was caught by the S.C.A.F. soldiers during the Scenario Five order. When the soldiers attempted to interrogate the others, they locked themselves inside with the broadcasting equipment. Since the order was to ensure that no one lived, they cut the power in order to disable the life support and stop the broadcast.

Upon the further exploration of the Greely, Isaac found a room with an overloading power generator and disabled it, overloading some of the gravity plating. The further investigation of the room revealed a key and an audio log by Laura Engstrom pleading for Barton to send the coded message to Dr. Serrano or all of their work would be destroyed. The key opened Engstrom's office so Isaac decided to head for her office to decrypt the coded message. Because the power generator was disabled earlier by Isaac, some of the gravity plating was overloading on the way to Engstrom's office, making backtracking more difficult. Upon reaching the office, it was revealed that "Papa Sierra" meant "Hide Rosetta". When talking about it with Santos, Isaac believed that the research involving "Rosetta" could be a key factor to the mission which prompted Santos to question why they would issue the cleanse order if it meant destroying Rosetta and Isaac figured that they either panicked or knew something that the others did not. Afterward, Santos thanked Isaac for looking into the Greely and Isaac continued the mission that the player left off.

Later in the Chapter, after Isaac went to the Terra Nova, he must venture back to the CMS Greely and salvage a port side engine from a destroyed shuttle. After getting the engine, Isaac returned to the Roanoke and the Greely was left in orbit with the rest of the ships in the flotilla after Isaac and the other survivors launched the shuttle to the surface.

You would have access to this optional mission during Chapter 4 and again during Chapter 7. To reach the mission area, you would need to get in the Skip and fly to the C.M.S. Greely destination choice. When you arrived, exit to enter zero gravity mode.

Walk to the end of the platform and look down for a piece of debris with a bird logo on it. Fly down here.  You would likely encounter a few Lurkers here so kill them if you like or ignore them for now. Work your way over to the frayed end of the debris and you found a door. Use Kinesis to open this and head inside.  Open the chest here for a Weapon Part – Compact Standard Frame [Weapon Part 1/4], a medical pack and some resources. To the right of the chest in the corner was a S.C.A.F. Artifact [Artifact 1/2].

Return outside and use your suit's locator. Fly over to the objective marker and head inside the door here.

Enter the door in front and continue through the next hallway. In the room here, there was a ladder on the left side. As you entered, there are some lockers containing some medical kits and to the right of the ladder, there was a shelf containing a Weapon Part – Compact Standard Frame [Weapon Part 2/4]. When you are ready to continue, climb down the ladder.

Turn around and kill the Lurker that jumped out of the vent. Use a Torque Bar on the wall socket here to open the door (If you do not have one, there was a nearby Bench that you would activate soon so you would be able to get one!) Inside, you would find a Weapon Part – Telemetry Spike [Weapon Part 3/4], an Upgrade Circuit [Circuit 1/2] in the locker on the wall and a bunch of resources and ammo. Return outside and climb down the stairs indicated by your suit's locator. Enter the door at the bottom and mosey on through the hallway to the other side.

Climb down the ladder here and activate the generator with Kinesis (Note that there was an Upgrade Circuit on the table to the right on New Game +). Climb back up the ladder and you would be attacked by a pair of Slashers and a Spitter. Go and use the now activated lift. At the top, loot the lockers in the hall here before proceeding through the door.

In the next room, there are a couple of lockers to loot in the control room to the right. What you wanted to do was to check the glowing blue box out. Approach this and interact with it for a puzzle. You need to balance the power so both needles are sitting in the green area.

When you successfully completed the puzzle, an Audio Log [Log 1/2] would play and the nearby door would unlock. If you want to double check, the audio log was at the bottom of the stairs and you could replay the message if you wish (Note that there was an Upgrade Circuit on the floor next to the chair to the left of the unlocked door on New Game +). When you are ready, proceed through the now unlocked door. Continue through the next hallway and exit back into the main room.

The two Slashers and an Exploder would be waiting for you. Kill them and head over to the now active Bench. Make a Torque Bar if you do not have one and enter the door to the right just above the stairs that we ventured down earlier. Grab the Upgrade Circuit [Circuit 2/2]. Exit the shower room and follow your suit's locator down the ramp and through the door that was indicated.

When you reached the large room with what looked like a biology lab in the center, you would be attacked by a Lurker and Spitter. When the room was clear, examine the right hand wall of the room. There was a pair of purple alcoves and the one furthest from the door had an Alien Artifact [Artifact 2/2] in it. There are tons of destructible crates that are strewn around the room as well so feel free to smash them for some ammo and when you are ready, go down the lift at the back of the room.

Work your way around the set path here around the low wall and kill the Slasher that was hiding here. As you approached the exit, another Slasher would appear so smash him down as well before proceeding through. As you interacted with the next door, deal with the Slasher that appeared before continuing.

Follow the walkway around to the left and kill the Swarmers that emerged from the wall in front. Go past the Bench here and use Kinesis on the blue circle on the wall to open the next door. Go on through and continue until you reached a room that had plenty of electricity that was blocking your progress.

To get rid of this, use Kinesis on the central structure to remove the panel that was sitting on top. Remove the Semiconductor and after a few moments, the electricity would stop running. Incidentally, this would also cause a number of floor panels to turn into gravity panels. Stepping on these glowing orange/pink panels was instant death so avoid!

At the back of this room, you would find a Weapon Part – Electric Charge [Weapon Part 4/4] (Note that this was still there on New Game +, but appeared as the Upgraded MK-II Electric Charge). There was also a blue circle on the control panel to the right. Use Kinesis on this to activate an Audio Log [Log 2/2].  Grab the security key from off the table to the right.

Now, it was time to backtrack. As you approached the entrance to the room, a group of Swarmers would rush in. Try to kill them before they could reanimate the corpses on the ground. Once you are clear, continue back through the tunnel to the lift, avoiding the gravity panels as you went. Once on board, head back up to the lab.

This part could be quite tricky. There are quite a few enemies that are populating the lab and more would show up as you progressively killed them. To make things a little more interesting, there are active gravity panels all over the place so try not to back up into any of them! We could use the gravity panels to your advantage. When a Necromorph came at you, try and put a gravity plate between them and you and 80% of the time as they would run over it and be killed.

After stepping off the elevator, the four Slashers and a Spitter would find their way over to you in the midst of the gravity panels. Once they are dealt with, head for the door and as you approached, a further three Slashers would also come out to play. Dispatch them before cruising through the door.

Return to the main area and kill the five Exploders that emerged from the various vents around the room. When they are cleared out, use the security card on the panel next to the Bench to unlock the door here. Loot the various bits and bobs in here and interact with the blue monitor on the back wall to complete the mission.

Backtrack outside to resume the main story.

Add a photo to this gallery 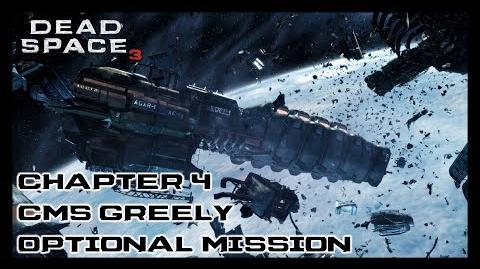 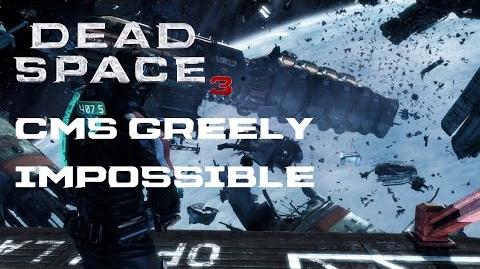 Retrieved from "https://deadspace.fandom.com/wiki/CMS_Greely?oldid=151765"
Community content is available under CC-BY-SA unless otherwise noted.