The CMS Roanoke was an abandoned Orbital Command Platform that was floating above Tau Volantis in Dead Space 3.

The CMS Roanoke, codenamed "Overlord", was the flagship of the Sovereign Colonies Armed Forces flotilla assigned to investigate Tau Volantis in 2311. It was not a conventional space ship, but rather an orbital command platform that served as the headquarters of the entire expedition. The vessel consisted of a large central spindle with two roughly equally sized modules attached to the sides. One was a giant docking area and repair bay. The function of the other one was not clear. The Roanoke featured a ready-room for operation briefings and Admiral Marjorie Graves's personal quarters.

During the Necromorph outbreak that doomed the S.C.A.F. expedition, a battleship designed for mine warfare that accompanied the flotilla released its payload of automated mines among the flotilla's ships. While the other ships are destroyed or heavily damaged, the Roanoke itself survived the mines mostly intact. Two hundred years later, the flotilla's local area was still heavily saturated with automated mines, making any attempts to approach it extremely dangerous.

After they escaped from the the destruction of the USM Eudora, Isaac Clarke, Robert Norton, John Carver and the surviving crew members, Rosen and Locke moved to take refuge inside the derelict ship. The first to board and enter, Isaac opened the shuttle bay doors, allowing Norton, Carver and the others inside the ship. Norton told Isaac that Ellie Langford's S.O.S. was located somewhere within the heart of the ship and gave him the coordinates to investigate. During the search, Isaac came across the two hundred year old "mummified" Necromorphs as well as a massive Necromorph creature of an unknown type which was briefly encountered in the vessel's power core.

Despite having a relatively large structural design, only a very small part of the ship was explorable. The vast installations that are seen on the other side are inaccessible.

After acquiring and launching the Crozier, the wreck of the Roanoke was left behind as Isaac and his team made their way down to the surface of Tau Volantis.

The Roanoke was an UD-24 class Orbital Command Platform (UIC 11267) with limited propulsion capabilities. It acted as the operational hub for the ships in orbit. It has external carriages to allow shuttles to dock. It is from here that planetside researchers arrived and departed. The facilities include the command center, shuttle maintenance/refueling bays, and facilities and sleeping quarters for the command staff and visiting researchers. In the center of the ship is a saucer-shaped tactical bridge that was used to strategically plan and oversee the mission. As a station, it possessed very limited flight capabilities, designed for space travel only, with no planetary capability. It was broken down into three consitutent sections: The engineering wing, the crew quarters and concourse, and the command section.

Exterior of the command saucer

Exterior of the western concourse

The engineering wing contained the external dry dock for servicing shuttles and other small spacecraft, such as the CMS Crozier, with the main airlock and pressurized internal cargo bay located perpendicular to the dock. The cargo bay doors could be operated even with the ship's power disabled, thanks to a dedicated override mechanism in the control room by the airlock, offering a good view of the interior of the dock.

Control booth for the cargo bay

The bay itself connected via an automated transfer bay to a repair bay, where parts could be machined and repaired using the bench and other tools, and by upper catwalks to another workshop on the upper level. The repair bay was essentially the hub of the engineering section, with multiple exits, including direct access to the generator in the command section, an access corridor to the main airlock with a Suit Kiosk, and double doors leading to the elevator and storage area. These doors were used to quarantine and seal off the crew quarters when Scenario Five was enacted.

Past the storage area lay another connecting corridor, providing access to the recreation deck and storage room 2A5, and the most impressive element of the Roanoke, the Concourse. Connecting the crew quarters, engineering, and the command section together, the concourse was a semi-circular chamber divided into three sections, western, central, and eastern. The western section connected engineering and the C.A.G. briefing room (seating 34 viewers; identification was required). The central section contained the other exit from the briefing room and entrance to the western concourse, with access to the officers' deck, service deck, and eastern concourse (and through it, the living quarters) on the other. The officeers' quarters were opulent, lined with wooden finishing, luxury chandeliers, and the most impressive quarter belonged to Admiral Marjorie Graves, head of the Galactic Expedition's fleet component. It had a separate office suite, with a small lounge, bar, and shelves stocked with the latest books.

The service deck allowed for maintenance access to the primary ventilation system and crossover tube connecting to the command section and the primary generator. The main ventilation chamber was named after S. Marinello, with two three-bladed propellers responsible for venting air throughout the ship. The primary generator, accessible through the service deck and the main elevator from the command saucer, consisted of a single main reactor that could be jumpstarted with three kinesis-cranked auxiliary generators.

The command saucer itself could be accessed through a crossover tube linking the repair bay with an elevator at the base of the saucer spire, and was a single, circular area with a commanding view of the surrounding area.

Elevator connecting the reactor and the command saucer

Interior of the command saucer 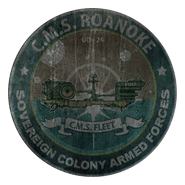 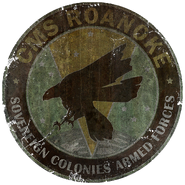 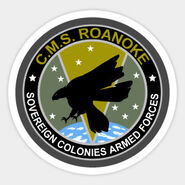 Isaac hurtling through the debris to the Roanoke

Wiew to the CMS Terra Nova from the Roanoke area