Dead Space Wiki
Register
Don't have an account?
Sign In
Advertisement
in: Articles with Spoilers, Ships, Spaceships,
and 2 more
English

The CMS Terra Nova was a Sovereign Colonies ship that was floating among the S.C.A.F. fleet orbiting Tau Volantis.

The CMS Terra Nova was used by the Sovereign Colonies Armed Forces during their expedition to Tau Volantis in 2311. Her commanding officer was Valery Dietz and she was piloted by Tucker Edwards. Her codename while in service to the S.C.A.F. was "The Luv Boat" and her UIC was "30692".

Isaac Clarke traveled to the Terra Nova to repair the CMS Crozier which laid in the Aft Station. On arrival, he must venture through the ship's many sections to reach the tram system while fighting the mummified crew off.

As Isaac ventured into the depths of the Terra Nova, the text and audio logs shed the light on the fate of the ship and the crew. Most are killed during the cleanse order issued by General Mahad. Those who are not are slaughtered by the insurgence of the Necromorph lifeform that was brought up from the planet. Eventually, Isaac reached the tram system where Buckell informed Isaac about a supply cache in the Conning Tower near the Mid Station in an optional mission. Isaac began searching for the cache and defending himself against the traps that are setted by Edwards who locked himself in the Conning Tower during the slaughter of the Terra Nova's crew. After surviving Edwards' traps, Isaac discovered the pilot's corpse. He triggered Edwards' final trap after he retrieved the supplies from the cache. Afterward, Isaac must head to the Aft Station of the ship to begin repairs on the CMS Crozier.

The story of the Terra Nova continued in Dead Space 3: Awakened. After Isaac and Carver managed to escape from Tau Volantis in a shuttle that was stolen from the remnants of Danik's forces, they arrived at the ship to learn that most of the surviving members of the Circle went insane and created a radical Unitologist Cult. The Unitologists that remained sane such as Randall Carr started to work on the ship's engines, attempting to jury-rig a ShockPoint Drive from one of their shuttles to the ship's reactor in order to fly the Terra Nova back to Earth. However, they are killed by the Cult Leader and his men before they had the chance. Isaac and Carver must continue this task and restart the engines and overload them beyond their designed parameters in order to generate enough power to the ShockPoint Drive. They succeeded, successfully entered ShockSpace and returned to Earth. Upon arriving back at Earth, they found out that the Brethren Moons already arrived and are attacking the planet. A Brethren Moon rose in front of the Terra Nova.

The CMS Terra Nova (UIC 30692) was a CL-13 class spaceship, classified as an ADT 60 Mass Driver, used by the Sovereign Colonies Armed Forces' AC-P fleet during the Galactic Expedition to Tau Volantis.

The Terra Nova is about 1/3 of the size of the Ishimura: Approximately 530 meters long, this measure was taken in gameplay using Isaac's body to measure the arms/ribs and spaces between of the cradle and translating that measure using the map found in the Tram system.

The ship has a tram system connecting the Fore, Mid and Aft sections of the ship. Apart from spacious cargo holds, it included several on board facilities including residential areas, environmental control, conning tower, tram stations and a shuttle. The Terra Nova could hold up to two large shuttles equal to the Crozier's size.

As the largest ship in the fleet, it acted as a cargo and resupply ship, hub for shuttle operations, and was responsible for transporting smaller ships through shockspace, safely stored inside its cradle. The sheer size of the ship required the use of a tram to travel between its three major sections: Fore, conning tower, and aft.

In many ways, the Terra Nova class of mass drivers was the forerunner of large ships of the future, such as the USG Ishimura (commissioned 120 years after Terra Nova's disappearance at Tau Volantis) and other planet crackers. Unlike them, Terra Nova had to work with limited technology and make use of all available space. To that end, every part of the ship was used for storage, with cargo crammed into every possible space, including access corridors and overhead stowage.

The cradle is perhaps the most immediately apparent element of the ship, enclosed by seven pairs of extensible arms allowing it to safely clamp to and ferry smaller ships. Smaller cargo ships, like the shuttles, would enter the cradle to unload their cargo, transferring them to the ventral guide rails running alongside the Terra Nova tram. Bundles would be then transferred by Cradle Operations crew (under Lt. Cdr. Sam Kettle) and distributed among the fore section's vast cargo bays.

Terra Nova's shuttle bays are also accessible from the cradle itself, allowing ships to enter and leave as needed. Under normal circumstances, the cradle was not meant to be entered by crew or other personnel, but the forward personnel docking station could be used for emergency access if needed.

Cradle operations as seen from the outside, with shield deployed

The fore section houses the bridge and ship communications, as well as the primary cargo bays, filtration controls, and cradle operations, among others. Any personnel transport ship docking with the Terra Nova was supposed to unload at the Personnel Docking Bay and enter the ship through its primary airlock. Just next to the airlock was a Suit Kiosk to aid crew members in suiting up before leaving and remove their gear when entering the ship. An elevator allowed direct travel between the entrance, the bridge, and the fore tram station.

The bridge is located at the very front of the fore section. The elevator opens into the driver compartment, with two stations (for the pilot, Lt Tucker Edwards, and ship captain, Cdr Valery Dietz. A pair of walkways connect it to the rear compartment, with stations for navigators, communication specialists, and technical personnel monitoring the state of the ship. Doors at the rear of the bridge allowed access to the fore mess hall, and through it, to the cargo bays.

The Terra Nova generally followed the standard food schedule for the fleet, with breakfast served 7:30 to 8:30, lunch 11:30 to 12:30, and dinner 17:00 to 18:00. The food was served from military rations and typically included rice, noodles, and potatoes for carbohydrates, and various sources of protein, such as chicken, turkey, beans, and occasionally beef. The mess hall also doubled as a recreational area.

Workbench in the mess hall

The cargo bays themselves dominate the fore section, filled with shipping containers, boxes, and animal crates ferrying dogs for use by planetside teams. As the operations continued, the bays also filled up with artifacts shipped up from the planet's surface, most notably Tau Volantis markers. The cargo bays are highly automated and required minimal staffing to operate and maintain. The main cargo hold connects from the forward mess hall directly to the fore tram section. The elevator in the tram station provided quick access to the bridge, entrance, and an access hallway leading directly to Cradle Operations.

Rules were posted prominently throughout the bays

Markers in the hold

Cradle Ops was the logistical hub, where the crew would oversee cargo transfers and cargo bay operations, with a commanding view of Terra Nova's cradle through the large windows. The upper section of Cradle Ops contains a technical bench and workstation for administrative affairs, while its heart lies in the lower section, with two seats for Cradle Ops officers and a monitoring console in the back. The system was heavily automated, with a manual override and overlay present at the window. The captain of the ship could visit and review the operations from a gallery just outside the elevator.

The Cradle Ops elevator also connects to the lowest section of the fore, Cargo Filtration Command, where Terra Nova crew would monitor cargo operations and transfers.

The conning tower section was accessible through the tram, and served multiple purposes: It housed the main tram control for the ship, communications hub, living quarters for the crew, and the conning tower itself, located on the dorsal side of the Terra Nova, providing a secondary bridge for meetings, coordinating operations, and giving a beautiful view of the area it was deployed to.

Upon exiting the tram, personnel could enter the restricted tram control, with a view of the station itself (illuminated richly, thanks to the see-through window surrounding the tram station), or proceed to the main conning tower area through the elevator.

The access corridor from the elevator connected to several areas, including the hub with control station for the aft of the ship, and through its upper level, to the communications den, which provided comms services for the whole ship, and included a workstation for transponder verification.

Coffins stacked throughout the Mid section

Coffins stacked throughout the Mid section

Control station in the central hall

Entrance to the comms den

Beyond lay the winding corridors of the middle section, which also doubled as storage. The SCAF at Tau Volantis used these to store cryoboxes containing infected soldiers, in a stark breach of quarantine. From this section, the crew could also access environmental controls, past the engine control center.

The main elevator to the conning tower sat above the control center and environmental, providing access to the living quarters for the entire crew (including a pair of showers), and the conning tower itself, with a commanding view of the dorsal side of the Terra Nova, monitoring stations for the entire ship, and terminals granting access to all the essential fleet systems and communications.

Workbench by the conning tower

View of the top of Terra Nova

The elevator grants personnel access to both the primary reactor located above the shuttle bay, as well as the shuttle bay itself, where spacecraft can be docked to perform repairs and refitting. The bay is divided into two major areas, with the front dedicated to major repairs and unloading, and fitted with multilevel catwalks and elevators, while the rear holds the fuel tanks and the primary shuttle bay control room. Shuttles can be refueled there, with the use of a Kinesis-enabled nozzle.

Front part of the shuttle bay, with the Crozier beneath tarps

Nose of the shuttle

Crozier parked in the shuttle bay for decommissioning

Rear area of the shuttle bay

The main chamber also has side chambers, where the gears for opening and closing the shuttle bay doors are located, along with the transfer bays where cargo is prepared for loading and unloading, including military ordnance.

Interior with view of the shuttle 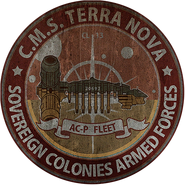 Concept art, with a ship docked in the cradle