Captain of the USG O'Bannon[1]

"Alright you bastards, come and get it!"
—Campbell's last words[1]

Caleb Campbell was the Captain of the USG O'Bannon.

Campbell and his crew of the O'Bannon set out to Aegis VII to find the shards of the Red Marker. However, not long after reaching Aegis VII, the landing crew encountered difficulty with the stabilizers overloading which was made irrecoverable by Nikolas Kuttner, forcing the landing crew to abandon the planet as it started to break up.

He attempted to get the O'Bannon further away from the planet to get clear of the planet's gravity well to shock out, but he was too late as the ship was caught and the debris damaged much of the ship's systems including its ShockPoint Drive, leaving them stranded and at the mercy of the planetary debris.

When Nolan Stross attempted to warn him about the Necromorph outbreak, he was busy talking with Alejandro Borges concerning the ShockPoint Drive and they ignored Stross all together. He along with the two security officers are able to survive long enough to meet up with Stross, Isabel Cho and Nikolas Kuttner. But, as they made their escape into the vents, the Necromorphs overwhelmed the last of the security officers. Campbell, Kuttner, Cho and Stross fled into the vents and made it to Stross' lab where they met with Borges and the two officers from the bridge. There, he asked Stross to explain what was happening on the ship and after learning that destroying the shard could stop the Necromorphs, Borges suggested that they should throw it into the reactor core and use the weapons made by Borges, they went to Engineering. The debris from the planet caused a hull breach, damaging the outer door control for Engineering. Captain Campbell sacrificed himself to seal the door manually and used a grenade made by Borges to blow himself and a group of Necromorphs surrounding him up.

The captain in Kuttner's flashback 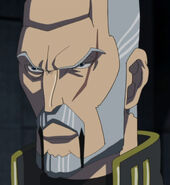 The captain in Borges' flashback 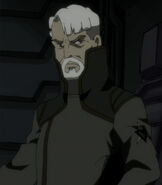 The captain in Stross' flashback