"Your future, the future of our race ends here!"
—Dr. Mercer talking about the Necromorphs

Doctor Challus Mercer was a scientist aboard the USG Ishimura and a devout Unitologist to the point of zealotry. Mercer became fanatically obsessed with the Necromorphs after the Ishimura was compromised and the infection spread. Mercer believed that the Necromorph infection was the next stage of the human race and their ability to reanimate necrotic flesh was life after death. He was the secondary antagonist of Dead Space.

Challus Mercer was one of the numerous Unitologists aboard the USG Ishimura, presumably introduced in the massive turnover caused by the Church of Unitology to grant Captain Matthius a majority of devouts composing the crew. [1] Even before the Necromorph infection began, Mercer was already showing signs of insanity, making fellow doctor Terrence Kyne distrust him. Before succumbing to dementia himself, Mercer ironically was one of the medical officers to study the colonists suffering from it, like Brant Harris. He even advised Kyne to bring more subjects to the ship in order to find out what was happening.[2]

While unconfirmed, it is quite possible that Challus Mercer was a high-ranking member of the Church of Unitology before joining the USG Ishimura. Often, Marker relics were found near Mercer; the first was the small Black Marker in his office and the second was the slightly larger variant of this ornament on a table near the place of his death on the Crew Deck. Furthermore, there was a recording of him making a speech to fellow Unitologists in Chapter 10, asking them not to abandon their faith despite the current outcomes of the extraction mission.

"I hope one of his beloved Necromorphs finds him before I do."
—Isaac Clarke: Chapter 5 mission log

When the Necromorph outbreak hit the colony, Mercer saw first the Hive Mind and the Necromorph transformation through recordings. He was convinced that they were the divine beings supposedly prophesied by Michael Altman.[3][4] Mercer even was the one who named the massive creature "The Hive Mind", making it one of the few named Necromorphs in-game.

When the infection reached the ship, he performed several medical experiments on the crew of the USG Ishimura, one of which resulted in the Hunter. Mercer's experiments were aimed at transmitting the infection to live subjects, which caused the Hunter's unique regenerative properties.[5][6] Mercer also attacked and killed numerous crew members and patients as the ship fell into chaos, as evidenced by the decapitated heads found in his office in the Medical Deck. After performing his experiments, Mercer devised a plan to take some frozen Necromorph specimens back to Earth, despite the heavily deteriorated condition of the ship by then.

Mercer is finally encountered in Chapter 5, trying to hinder Isaac's efforts to kill the Leviathan by locking doors.[7][8] When Isaac reaches the Chemistry Lab in order to get the poison capsule, Mercer presents himself through a nearby window. He tries to convince Isaac that the Necromorphs are the salvation of mankind, the next step of evolution, and releases the Hunter to attack Isaac, locking him inside the lab. He is later seen when Isaac is ambushed by Necromorphs at the Intensive Care Room, trying to convince him to just give up and let them kill him. He leaves shortly before they enter the room, locking the door once again. When Isaac finds the required DNA sample, Mercer decompresses the entire Medical Deck and locks Kendra Daniels out of the controls, in another attempt to kill Isaac.[9] He is last seen at the Cryogenics Lab, telling Isaac his plan to make the infection reach Earth by bringing frozen Necromorphs there. He then leaves him to be killed by the Hunter, once more trapping him in the room with the creature.

While Isaac was busy killing the Leviathan, Mercer unfroze the Hunter.[note 1][10] After this, he is reencountered in Chapter 10, murdering the crew member Jacob Temple after having killed Elizabeth Cross. It is hinted through the scenery that Mercer went to the Crew Deck to murder any remaining infidel survivors and to advocate the mass suicide among his fellow Unitologists. He may have been there since he unfroze the Hunter.

"Your time has come. No need to be frightened. No reason to fight. Many have gone before us, and now it's time for us to take the voyage together, to transcend death... and let the future take its course. Join me, as I gaze upon the face of God!"
—

After Isaac defeated the Hunter, Mercer allowed himself to be killed by an Infector, becoming a Necromorph himself —an Enhanced Slasher.[11] Isaac Clarke encountered the changed Mercer and euthanized him.[note 2]

Before his descent into madness, Mercer was a loyal and hardworking crew member aboard the USG Ishimura despite being a devout member of the Church of Unitology. After the Necromorph outbreak, Mercer became insane and attempted to aid the Necromorphs in their assault on the ship, believing that they were sent by God to destroy humanity. He sided with Captain Mathius in the belief that the Red Marker was a holy artifact, but could tell that Dr. Kyne wanted the Marker away from the Ishimura. In an abandoned log tape, Mercer revealed that, while Dr. Kyne was studying the Marker to find a means of ending the infection, Mercer himself was experimenting on live crew members to create stronger Necromorphs.

It is interesting to note that, although Mercer was insane, he was still able to point out those who were under the influence of the Marker, as he did when detailing how Dr. Kyne mentioned speaking to his wife—noting that "Amelia Kyne has been dead for some years". It is uncertain how much Mercer was acting due his dementia and due to his pre-established fanatism. Mercer showed no interest or sympathy in the survival of the Ishimura's crew. He praised Isaac Clarke for surviving snare after snare, but believed that all attempts to survive on Clarke's part were pointless. Mercer also had very little humanity as he performed trepanation on a conscious colonist in order to directly infect them while they lived. He also bored holes into the skulls of other dead crew members to ensure easy infection. 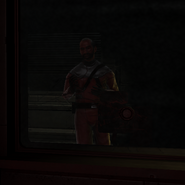 Mercer at the Intensive Care Room. 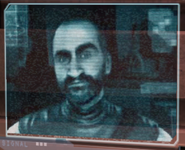 Mercer during a transmission to Isaac via Isaac's RIG. 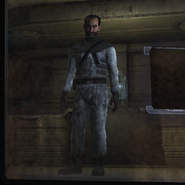 Mercer at the Cryogenics Lab.

The recording of Mercer found in Chapter 10. 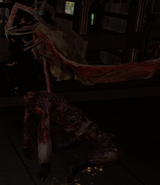 Mercer's dead body getting ready to be infected.

Mercer as an Enhanced Slasher.