Chapter 10: Déjà Vu on the Ishimura

Déjà Vu on the Ishimura

Down in the Mines
Dead Space Wiki doesn't currently have a walkthrough for this level, could you write it?

"Isaac: - Ellie, I'm in. There should still be a computer in the flight lounge. I can check the ship's status from there.
Ellie: Are you okay? You sound a little nervous.
Isaac: Last time I was here things didn't go so well. Look I'll contact you soon.'"
—Conversation between Isaac and Ellie

Chapter 10: Déjà Vu on the Ishimura is the tenth chapter of Dead Space 2. This chapter mainly takes place on the USG Ishimura—its Bridge, Medical, Engineering, and Flight Decks are all revisited.

Isaac attempts to snare the fleeing Government Sector with the Ishimura's gravity tethers.

After leaving the CEC Facility tunnel in flames Isaac, Ellie, and Nolan all ride down the rail line on the Transport. However, Tiedemann uses the Solar Array to fire on the track, severing the rails and almost derailing the trio's transport. Isaac then must travel into the Ishimura to activate the gravity tethers to reconnect the track.

Having boarded the empty Ishimura through a maintenance entrance built into the hangar, Isaac checks the ship's status on the Flight Deck (from the same terminal he interacted with in the first game).

Isaac then travels through the Flight Deck and then through the Tram Tunnels, encountering several Necromorphs along the way, eventually reaching the Engineering Deck.

There, he repairs the Gravity Centrifuge and takes a Tram to the Medical Deck, unable to reach the Bridge due to an unknown obstruction. Clarke fights his way through the Medical Deck, his hallucinations of Nicole becoming more and more severe. He finally enters the Tram System on the other side of the Medical Wing, which no longer has gravity. Isaac navigates the Zero-G tram tunnel and proceeds to the Bridge.

There, he activates the gravity tethers and leaves the Ishimura in an Escape Pod, while getting a transmission from Ellie, who is attacked by a crazed Nolan Stross. 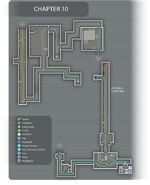 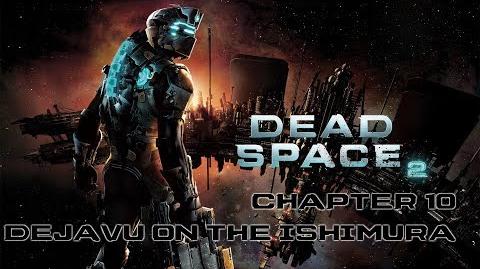