Repair the Shuttle
Dead Space Wiki doesn't currently have a walkthrough for this level, could you write it?
End of Days is the tenth chapter of Dead Space and takes place on the USG Ishimura Crew Deck.

Isaac brings the Singularity Core to the shuttle and also meets up with Dr. Kyne. The Hunter returns from its frozen stage and Mercer makes an appearance once again.

After narrowly escaping the USM Valor with its Singularity Core in Chapter 9: Dead on Arrival, Isaac Clarke takes the tram from the Cargo Hold to the Crew Deck. Isaac's mission (as instructed by Kendra Daniels and the late Zach Hammond) is to use the Singularity Core to repair a relatively intact shuttle and escape the Necromorph-infested ship. Kendra contacts him in the Tram Docking Station to tell him that, although she has located the shuttle, someone has intentionally removed the navigation cards. She says that there are three cards in various locations on the Deck but she cannot disable the necessary doorlocks from her position in the Computer Core so Isaac will need to find a Crew Key.

Some mysterious candles trail from the Tram Station to the Commons Lobby where a mass of people have seemingly died by their own hands. From here, Isaac takes an elevator up to a catwalk, where there is a text log that extensively scrutinizes the Church of Unitology - a religion based on the worship of the original Black Marker (an alien artifact discovered on Earth by Michael Altman). The Marker on board the Ishimura: Marker 3A is an apparent replica of its black counterpart. The catwalk leads to the Mess Hall which is covered with The Corruption. On the other side of a glass panel, Challus Mercer has taken Engineer Jacob Temple hostage; Mercer implies that he has murdered Temple's girlfriend Elizabeth Cross (whose corpse lay near them) and precedes to impale Temple in the forehead with a metal stake. Mercer leaves the dead couple for infection and Isaac circles 'round and enters the room. An elevator takes him down to the lower level of the Mess Hall where two Dividers ambush him; he retrieves the Crew Key from a container located near an immature Guardian.

When returning to the upper floor of the Mess Hall, Isaac is contacted by Dr. Kyne again. Kyne tells him that he is in the Crew Deck and wishes to speak with him in the Security Station once Isaac has gotten the three Navigation Cards. Isaac kills a Guardian and an Enhanced Slasher in the Recreation Hall then unlocks the elevator with the Crew Key and takes it to Sleep Block A Commons. Kendra tells him that Block B has no life support so Isaac finds an override in order to unlock the door. He enters Block C in order to reach the override but he is attacked by a Drag Tentacle which he makes short work of. In a Storage Room, Isaac activates the override with his Kinesis Module then travels to Sleep Block B. This block has been breached and is therefore in a vacuum as well as being infested with various Necromorphs including the Enhanced Lurkers. Luckily, Isaac only has to grab one Navigation Card and briefly pass through this Block before he returns to the Commons Lobby.

Connected to the Commons Lobby by a restroom, the Zero-G Basketball is an optional sport for Isaac to partake in. Of course the Basketball Chamber serves a much more relevant purpose: it contains the second Navigation Card. From the Recreational Hall leading out of the Basketball Chamber, Isaac unlocks a second elevator with the Crew Key and takes it up to Sleep Block C. A large monitor rotates in the center of this Block, upon which play Mercer's messages about accepting death. It is apparent that he has convinced the majority of the surviving crew members (especially Unitologists) to commit suicide and has killed anyone who has refused including Temple and Cross. This is also a rare area where Pods are located without the presence of a Guardian. The bunk beds in Block C Bunks can be shifted using Kinesis to reveal hidden rooms and in the back room, a woman shoots her head off while surrounded by dead Unitologists. Isaac finally picks up the last Navigation Card only to be contacted by Mercer who stresses that he won't escape like he did in Chapter 5: Lethal Devotion and sets his recently revived Hunter on him.

Isaac is trapped in Block C with the Hunter and Enhanced Lurkers and Slashers until Kendra can override another of Mercer's lockdowns. Once Isaac escapes the Block, Kyne tells Isaac to meet him in the Executive Area but Kendra advises caution as Kyne is potentially insane. Isaac returns to the Commons Lobby catwalk and enters the Executive Security Room where he sees Kyne talking to his deceased wife before noticing Isaac's presence. He tells Isaac that, because the Shuttles Shockpoint Drive isn't working, escape is impossible. Yet he says not to lose hope as he did (revealing that he was the saboteur who crippled the ship's Engines and Centrifuge in an attempt to destroy the Marker). Kyne shows Isaac a video log from the Aegis VII Colony showing a massive creature that emerged as a result of the Planet Crack. This is the creature Mercer previously referred to as The Hive Mind. Kyne says that The Hive Mind controls all of the Necromorphs telepathically and that is why they all work together as an ecosystem. He also says that The Marker can 'contain' The Hive Mind if it is returned to Aegis VII. What is disturbing is that Kyne appears to be taking orders from his wife Amelia Kyne who has been dead for some years; regardless, Isaac decides to abide by Kyne's request.

After taking an elevator to the Executive Quarters and killing a large group of Pregnants, Isaac enters the Executive Shuttle Hall and inserts all three Navigation Cards into the Shuttle. Kyne makes his way there while Isaac test fires the Engines which prompts a Twitcher and Hunter to attack. After Isaac dismembers the Twitcher and finally kills the Hunter for good with another blast from the Shuttle's Engines, Kyne arrives and tells him to release the Shuttle locks so that he can retrieve the Marker from the Flight Deck. Kyne tells Isaac to meet him in the Flight Deck and Kendra advises Isaac to obey him in order to ensure a ride off of the Ishimura in the only functional shuttle. On Isaac's way to the tram, Mercer contacts him from a room with an infector in it and urges Isaac to embrace death, before sacrificing himself to the Infector. Isaac encounters the new Mercer: an Enhanced Slasher and kills him before finally reaching the tram. 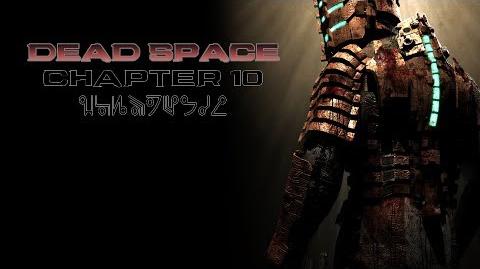