Return the Marker to Aegis 7
Dead Space Wiki doesn't currently have a walkthrough for this level, could you write it?
Alternate Solutions is the eleventh and penultimate chapter of Dead Space and takes place on the Flight Deck.

Isaac returns to the Flight Lounge where he helps Dr. Kyne load the Red Marker aboard his shuttle. Nicole shows up again and Kendra reveals herself as a government agent.

Chapter 11 takes place in the Flight Deck of the USG Ishimura, the area where the USG Kellion boarded in Chapter 1: New Arrivals. Isaac Clarke is trying to meet up with Dr. Terrence Kyne and load The Marker onto the Executive Shuttle which Kyne has brought from the Crew Deck to the Flight Deck. As Isaac leaves the tram, Kyne tells him to find The Marker in the Cargo Bay and to use a cargo loading lift to transport it to the Hanger. Isaac enters the Cargo Bay, kills an Exploder and a Pregnant, activates a cargo control switch and uses his Kinesis Module to drag The Marker to the cargo loading lift while battling many Necromorphs including Drag Tentacles.

Kyne tells Isaac to load it onto the Shuttle in the Hanger which he can now access because Kendra has activated an elevator. Kendra makes her way from the Computer Core in the Bridge to the Hanger as Isaac enters the Flight Lounge―the area where the Kellion Crew first met the Necromorphs. Ironically, yet another quarantine activates in this room and Isaac stands his ground against many Slashers before entering the Hanger. Kyne docks the Executive Shuttle, but the automatic loading controls aren't working, so Isaac will have to bring The Marker directly underneath it once the gravity is offline. Despite the Lurker and Enhanced Leaper attacks, Isaac manages to slide The Marker along the rail and underneath the Executive Shuttle with Kinesis (while also activating the necessary switches to rotate the rail). Isaac restores gravity and Kyne loads The Marker onto the Shuttle. Kyne waits for Isaac outside the Shuttle but as he approaches, Kyne is suddenly shot through the chest by Kendra.

Kendra steals the Shuttle as Kyne dies and reveals herself to be a secret government agent whose objective was to return The Marker to Earth all along. She also reveals that this Marker was actually manmade and a reverse-engineered version of the Black Marker. Marker 3A was an experiment placed on Aegis VII to see what it could do, of course it was abandoned when scientists discovered its grim effects and was activated years later when the CEC Colony settled on the planet illegally. Immediately after Kendra leaves, Nicole contacts him and tells him to meet her in the Flight Control Room; Isaac kills a Guardian before reaching her. She tells him to remotely pilot the Shuttle from the Control Room and Kendra escapes in an escape pod as the Shuttle is dragged back into the Hanger. After killing a trio of Enhanced Leapers, Isaac and Nicole board the Shuttle and travel to the Aegis VII Colony. 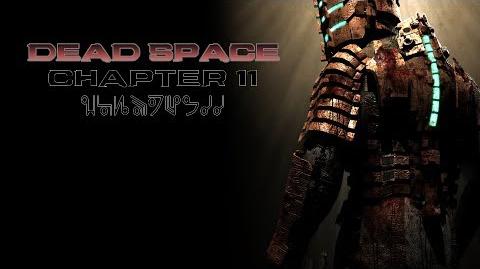