Chapter 11: Down in the Mines

Down in the Mines

Déjà Vu on the Ishimura

The Drill
Dead Space Wiki doesn't currently have a walkthrough for this level, could you write it?

Chapter 11: Down in the Mines is the eleventh chapter of Dead Space 2. This chapter is mainly located in the Mining Complex on The Sprawl.

Isaac successfully escapes the Ishimura via one of the ship's escape pods, but the pod malfunctions and crashes into The Sprawl. Isaac must fight through the mines to make it back to Ellie and Stross to continue on to Government Sector.

After Isaac crashes with the escape pod, a hallucination of Nicole appears, recalling an earlier line about how lucky she was to be able to serve aboard the USG Ishimura, and how it was all thanks to Isaac. Just before the hallucination ends, Nicole becomes hostile again and shifts from acknowledging Isaac as the reason she got the position on the Ishimura, to the reason she was killed, altering the line "You made me stick with it" Isaac just before disappearing; "You made me die!" refering to the fact that Isaac made her go on board the ship that led to her demise. As Isaac regains consciousness, Ellie calls Isaac and Stross is seen trying to put a screwdriver into Ellie's eye. Ellie tries to fight back, but Stross is just a moment away from inserting the screwdriver when the video log ends. After the first room, Isaac enters a room with a giant fanblade, Isaac hears Stross, and asks him why he did it, Stross replies that he "couldn't face it". Isaac enters a room with Cysts. Eventually he enters a dark cave that needs a power cell to enable him to proceed to the next area. As soon as the power cell is replaced, the lights turn on and a door unlocks. Isaac then enters the next area and encounters Stross holding the screwdriver with Ellie's eye pierced through it. As Stross tells Isaac it's his turn, Ellie is seen behind Stross, who then hits him with a metal object. After which, she turns to Isaac, telling him "You owe me an eye, you bastard!" Stross then gets back up and attempts to attack her. Ellie is seen holding off Stross as a security wall rises, sealing Isaac off from the two. Isaac continues further on when suddenly a Drag Tentacle pulls him out to a vacuum area outside the station.

Three mining lasers are blocking the way back inside. Isaac puts thrusters on the lasers, allowing him to re-enter the station. As soon as Isaac is back inside, Ellie calls him, and tells him that Stross is gone. Isaac continues on a freight elevator, entering the next area. After that he enters a corridor with a Power Node-locked room and pre-deployed Detonator mines guarding the door leading to the next area. After destroying the Detonator mines, Isaac enters a corridor with a locked door. While Isaac is in the process of hacking the door, it suddenly opens from the other side and Stross ambushes Isaac, attempting to stab him in the eye with the screwdriver he previously used on Ellie (with her eye still on the screwdriver). Isaac manages to overpower Stross and forces the screwdriver into the side of his head, killing him.

Isaac then enters the mines. He must replace the burnt out power cell in order to advance. Afterwards, Isaac enters a door leading to the Exploration Mine Elevator. As he enters a dark corridor, a second hallucination starts with Nicole saying that it is a shame what happened to Stross. After the hallucination ends, Isaac takes the elevator up as waves of Slashers attack. As the elevator stops, Isaac proceeds to the door leading to the next area. Upon opening the door, Isaac is attacked by "Nicole", who grabs his throat, lifts him up with one arm, and begins to strangle him, initiating an action sequence.

When prompted to tell her why Isaac can't let her go, he replies, "Because you were my everything... and if I let you go... Then I've got nothing left". The hallucination of Nicole then adopts a normal appearance devoid of any gore and tells Isaac that the final step was acceptance. As she walks away she tells Isaac that he is "Ready to finish this". After Isaac exits the room, the chapter ends as he sees the giant drill Ellie located. 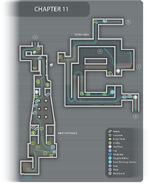 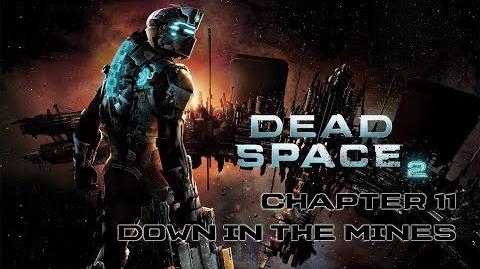