Return the Marker
Dead Space Wiki doesn't currently have a walkthrough for this level, could you write it?
Dead Space is the twelfth and final chapter of Dead Space and takes place on the Aegis VII Colony.

Isaac travels together with Nicole to the surface of Aegis VII and returns the Marker back to its pedestal in an attempt to end the Necromorph threat once and for all. As Isaac takes the Red Marker off the shuttle and proceeds to return it to the pedestal from which it was removed, he meets the former colonists of Aegis VII, and they will not make his duty any easier.

Chapter 12 takes place in the illegal CEC mining colony on Aegis VII. Isaac Clarke and his girlfriend Nicole Brennan have taken an Executive Shuttle (that Isaac previously repaired in Chapter 10: End of Days) containing The Marker to the colony in order to contain The Hive Mind - the telepathic commander of all Necromorphs. Isaac, as instructed by Nicole, uses his Kinesis Module to slot the loader into position and unloads The Marker. Isaac then slides The Marker along a set of tracks on the Landing Pad while traveling along a parallel walk way but is stopped because the door to Operations A is missing a power cell. Isaac finds a replacement in the Gravity Tether Computer Room but is ambushed by Infectors and a Divider when he attempts to insert it into the relevant socket. Nicole tells him that The Marker creates a 'dead space' field that suppresses any nearby Necromorphs and that the scientists created a podium that amplifies the effect radius years ago. The Hive Mind can be suppressed if The Marker is placed on this podium. Isaac activates a monitor that raises a shutter that was blocking The Marker tracks and brings it into Gravity Tether Operations A. A quarantine activates and Isaac battles Necromorphs while raising some bridges that are blocking the tracks; after the quarantine lifts, Isaac raises another shutter and brings The Marker into the Gravity Tether Core. Nicole tells him to restore power to the bridge switches by using a Control Station at the back of a Maintenance Tube. The Tube is protected by a pair of Guardians and has no gravity, Isaac kills some Enhanced Leapers and Lurkers before restoring power to the bridge switches using Kinesis. However this also restores power to the Tube fans which Isaac has to hit with Stasis before passing.

When Isaac returns to Gravity Tether Core, an Enhanced Brute attacks him but that doesn't stop him from raising the bridges and dragging The Marker to Tether Operations B and then into The Excavation Site. He arrives just in time to catch a glimps of the colossal tentacles of The Hive Mind before several Drag Tentacles attack. They are followed swiftly by Twitchers and Enhanced Lurkers and Slashers which he kills and then pulls The Marker along a narrow causeway. When Isaac finally loads The Marker onto its pedastal, it emits an unusual glow and Nicole emerges from behind it. She says that they are 'whole again' and then mysteriously vanishes as The Marker releases a bright flash. This flash dissables the gravity tethers that are holding a huge continent sized piece of the planet in place but when Isaac tries to return to the Shuttle, he is locked in a chamber by Kendra.

Kendra has exited her escape pod that she launched in Chapter 11 and removes The Marker right before Isaac's eyes. She reveals that Isaac is insane and to prove it, she shows him the vid log that Isaac watched at the beginning of the game only this time, it plays right to the end. At the end of the video, Nicole commits suicide and Isaac realises that every time he has seen her on the Ishimura, it has only been an apparation of The Marker. The truth is that The Marker has tried to convince him to return it to the podium - The Marker appears to have a subconscious mind of its own. Kendra leaves with the Marker and the exit door finally unlocks; Isaac takes this door through a corridor, through the Gravity Tether Computer Room and into The Landing Pad just in time to intercept Kendra. The tremors caused by the falling debris causes Isaac to fall over and, just as it looks like Kendra will escape on the Shuttle, a tentacle of The Hive Mind squashes her and slams her against a wall, which kills her, as a flatlining RIG is heard.

Since Kendra removed the Marker from its podium, Isaac is forced to kill the monster with his weapons rather than suppressing it. Isaac shoots the five yellow lumps around its 'mouth' as it tries to devour him and then shoots the five in its 'chest'. While this happens, Isaac also has to kill Pregnants while avoiding the volatile projectiles that The Hive Mind launches at him. After a strenuous battle, The Hive Mind collapses and its tentacle retracts allowing Isaac to enter the Shuttle. Isaac leaves The Marker behind and escapes just in time to see the debris crash into the planet.

Some time passes after this, Isaac removes his helmet and reminisces as his Shuttle drifts through space. He begins to watch Nicole's tape but cannot bear to watch it all, he switches off all of the monitor but then he sees something in his peripheral vision. As he looks to his right, Nicole attacks him - the screen cuts to white and the credits roll. 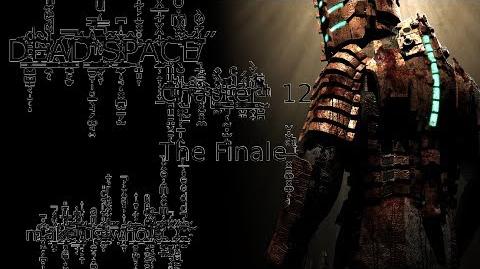