Marker Access and a New Threat
Dead Space Wiki doesn't currently have a walkthrough for this level, could you write it?

Isaac and Ellie finally reach Government Sector through the use of the mining drill. Ellie finds a gunship, hoping to escape once and for all with Isaac. However, Isaac knows he still has to destroy the marker, even though he hasn't discovered how to yet.

Shortly after Isaac's and Ellie's arrival in Government Sector, Ellie finds an EarthGov Gunship that is still operational, and plans to finally depart The Sprawl with Isaac once and for all. However, Isaac feels obliged to put an end to the Marker without risking Ellie's life, and remotely launches the ship with Ellie onboard despite her protests.

After Ellie has departed, Isaac has a short talk with Nicole's apparition and then hacks his way into the Marker Facility, where he is confronted by EarthGov Security Officers in the lobby. He manages to escape and subsequently cuts off the power in the lobby, allowing hordes of Necromorphs to enter the facility and slaughter the security personnel. After the horde has passed, Isaac slips inside behind them.

Once inside, Isaac then has another vision of Nicole, who aids him by showing him the way to the Marker. After some tough battles with the Necromorphs that had recently entered the Facility, Isaac finally reaches an observation platform overlooking a massive room containing the Marker, which to Isaac's amazement, is vastly larger than the original Aegis VII Marker. Upon arriving at the Marker site, Tiedemann informs Isaac that the hordes of Necromorphs Isaac just let in has triggered a massive Convergence event far outside the scope of anything Tiedemann had ever planned for. Just then an explosion cuts off his RIG link to Isaac.

After the call with Tiedemann ends, Isaac then sees the Noontech Diagnostic Machine - a machine that stimulates the areas of his brain infected by the signal of the Red Marker, by means of inserting a needle through the eye all the way to the brain. An apparition of Nicole then appears and explains to Isaac that he must use the machine in order to gain the knowledge needed to destroy the Marker. Isaac asks "Nicole" if it will hurt, to which she only responds, "Yes". Isaac then crawls into the machine, initiating Stross' "steps". Isaac completes the final step, inserting the machine's needle into his eye, unlocking the dormant information in Isaac's brain that he needs to destroy the Marker. 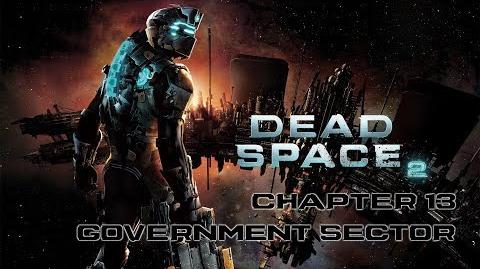