It Ends Here
Dead Space Wiki doesn't currently have a walkthrough for this level, could you write it?

Chapter 14: Marker Access and a New Threat is the fourteenth chapter of Dead Space 2.

Isaac must make his way to the Marker while fighting the Ubermorph and several other Necromorphs off.

After exiting the NoonTech Diagnostic Machine, Isaac encounters the Ubermorph, a "pure" Necromorph which has the ability to regenerate its limbs. Isaac has to disable it for enough time to hack the control panel of a door and get out of the room. After walking through a corridor, he enters a room where he had to use the body of a man as an ID to get past the room, at the same time being attacked by the Ubermorph and the other Necromorphs (Enhanced Slashers and Pukers). Isaac finds himself being followed by the Ubermorph through most of the chapter while simultaneously fighting his way through the small, narrow corridors. After being attacked by the Enhanced Slashers, Swarmers and the Ubermorph, Isaac finds himself in the process of trying to get to an elevator which takes him down to a small room where he is attacked by more Necromorphs which he can exit after hitting a circuit board which was jamming the door. Next, Isaac proceeds into a Zero-Gravity chamber. After that, the Ubermorph does not appear until the end of the chapter after this stage. Isaac floats through a couple of hazards and a Nest which he finds at the end of the Zero-Gravity room. After deactivating the gravity and exiting the Zero-G room, he enters a passage where he finds a Power Node locked room. Exiting the passage, Isaac enters a chamber which had a Store, a Bench and a door at the other end of the room which upon proceeding through, he began the final chapter. 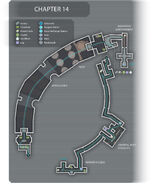 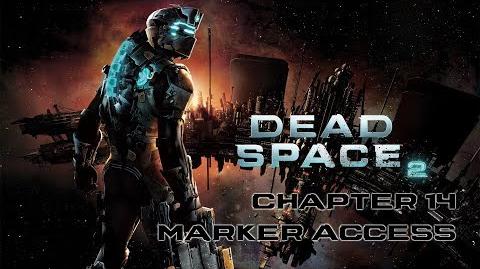