Repair the Tram System
Dead Space Wiki doesn't currently have a walkthrough for this level, could you write it?

New Arrivals is the first chapter of Dead Space. It begins with the USG Kellion's security team arriving on the USG Ishimura to discover the horrific state of despair it is in and what has happened to the crew.

Throughout the chapter, Isaac is sent around the flight deck to repair the tram system so the others may access the bridge of the ship. The chapter ends with Isaac boarding a tram headed for the medical deck to find Captain Benjamin Matthius.

In the first chapter, Isaac Clarke, on board the USG Kellion, attempted to dock on the USG Ishimura after receiving a distress beacon. Isaac is accompanied on the ship by: Kendra Daniels, Zach Hammond and the minor characters: Chen and Johnston. While attempting to land on the docking station of the USG Ishimura, The Kellion crashes after losing the port booster, but all of the crew survive. When exploring the Ishimura, the surviving crew was attacked by Necromorphs and Isaac is separated by quarantine from the rest of the crew. Having no weapons, all Isaac can do is run and after being relentlessly pursued by a couple of Slashers, he took refuge inside an elevator and then later finds his primary weapon, the Plasma Cutter. Isaac must re-group with Kendra and Hammond by repairing the tram system. This involves removing a broken tram from the lines, then placing a removed data board from the system. Isaac is then instructed to go load the damage reports on the Kellion, where the ship then explodes, nearly taking Isaac with it. Kendra and Hammond then tell Isaac to go to the Medical Deck in the Ishimura to retrieve the Captain's RIG codes to retrieve information about what happened and get clearance to some areas.

Aboard the USG Kellion, Isaac Clarke, Kendra Daniels, Zach Hammond along with the two Corporals, Chen and Johnston are making their way to the planetcracker vessel called the USG Ishimura after receiving a distress signal. En route, Isaac was watching a video log from his girlfriend, Nicole Brennan who was worried about the events that are occurring within the Ishimura. As the transmission ended, Kendra assured Isaac about Nicole's fate as Hammond announced that they are almost at their destination.

Out of orbit, the crew made visual contact with the Ishimura, dim due to the lack of lights. The Kellion tried to contact the Ishimura through telecommunications as they made their way to the ship. Hammond ordered the Corporal to boost the signal in order to get a better reception. After doing so, they received a brief and unintelligible transmission, leaving all aboard the Kellion confused. Kendra believed that it was due to the problems with the Communications Array and ordered immediate landing in order to inspect the ship further. As the Corporals activated the automatic docking procedure, they are hit by one of the debris orbiting around the ship, causing the Kellion's docking procedure to go off track which meant that crashing into the Ishimura's hull was imminent. Hammond ordered the Corporal to activate the blast shields by saying that it was safe due to the damaged guidance tether. Kendra thought that it was suicide and told the Corporal to abort, but was quickly reprimanded by Hammond by saying that they would make it. After doing so, everyone on board's vision faded into white and awoke alive and unscathed.

As Kendra reprimanded Hammond for nearly killing them, Hammond begged to differ as he saved everyone's lives on board. As he asked the Corporal to check the shuttle's damage reports, Isaac donned his helmet. The Corporal exclaimed that they lost the autopilot and the communications and also could not get any readings from the port booster. As Kendra synchronized Isaac's RIG with the team's, Hammond and the Corporals prepared to leave the shuttle. Isaac after a quick check on his surroundings abruptly followed. As he got out of the Kellion, Kendra saw that the port booster was missing from the shuttle instead of simply having lost power to it as they originally thought. As the rest of the team made their way to the Flight Deck, Isaac used his RIG to open the door as the team prepared to make their way in. As they inspected the area, Hammond ordered Isaac to inspect the security console while he ordered Kendra to get the elevator online. Kendra reported that the power was not online as Hammond frustratingly answered back by telling her to re-route the power. As he calmed down, Isaac inspected the console.

Once Isaac interacts with the console, a hologram screen on the Ishimura appears, showing multiple damaged systems throughout the ship. As the air vents in the Flight Lounge powered up and started blowing in air, the Quarantine System activates, tripping an alarm and shutting off almost all the lights in the area. This also locks all the doors which cuts Isaac off from the rest of his crew and traps them in the Flight Lounge. Hammond attempts to restore calm by assuring everyone that the Quarantine System was (Probably) caused by a malfunction during the restarting of the air filtration system, but seconds later a figure that appears to have scythe-like arms attached to its back is shown leaping out of the air vent and sneaking up on Corporal Johnston from behind. The crew of the Kellion then finds out first hand why the crew of the Ishimura hasn't been responding to any communications from them. Most of them had been infected by an alien virus and transformed into horrifying monsters known as Necromorphs.

Corporals Chen and Johnston are killed by the most common form of Necromorph known as the Slasher and Kendra tells Isaac to run to safety (as he is separated from her and Hammond). Isaac himself is pursued by slashers until he reaches an elevator where he activates the elevator via his RIG. Then suddenly a slasher pries the doors open only to be crushed by them as they slam shut. After exiting the elevator, Isaac comes across a Plasma Cutter repair bench and (more importantly) a 211-V Plasma Cutter. Besides the bench is a corpse and written in blood on the walls is the message: Cut off their limbs. The message refers to the fact that dismembering the necromorphs is the most efficient way to kill them. The next door unlocks when Isaac shoots a panel with the Plasma Cutter and a surviving crewman of the Ishimura is killed by another Slasher which Isaac must also kill. While traversing the corridors, Isaac finds many Logs as well as ammo and Med Packs. Isaac reaches the Tram Control room where he can see Kendra and Hammond on the other side of a window in the flight deck station and Hammond tells them both that they must repair the tram system in order to reach the bridge. Kendra discovers that there is a spare databoard in the maintenance bay that can replace the current 'fried' one and that a broken tram needs to be removed as it is blocking the tunnel. Hammond realises that, because of the quarantine, only Isaac has the ability to fix the problems so he promises to use the personnel files to find Nicole if Isaac can get them to the bridge.

On his way Isaac crosses an empty tram tunnel where he picks up a Stasis Module and uses it to pass through a malfunctioning door; when he reaches the broken tram, he uses the stasis to slow down one of the mechanical arms so that he can remove the tram before the arm retracts. It is in this same room that Isaac picks up his first Power Node. Once the tram is replaced, Isaac makes his way back across the tram tunnel where he encounters a Leaper. Isaac takes an elevator to the maintenance bay when Kendra informs him that the storage room containing the databoard is locked and that he will have to take another elevator to retrieve the key. Isaac gets the key and unlocks the storage room where he finds the databoard, a power node and a bench. Isaac inserts the databoard into the computer array in the Tram Control Room and calls the replaced tram to the flight deck station so that Daniels and Hammond can board it. As the two ride the tram to the bridge, the quarantine inexplicably lifts and Hammond tells Isaac to go back to Kellion and prep it for launch. As Isaac passes through the flight lounge, Hammond tells him that there are no survivors in the bridge and that they are going to try to reach the Command Computer. As he boards Kellion and loads a damage report, the hull is attacked by Slashers and Leapers, the ship explodes and Isaac barely escapes intact. Kendra contacts him and tells him that, due to an executive lockdown of the command computer, Isaac will have to retrieve authorization codes from the RIG of deceased captain Benjamin Matthius located in the Med Labs of the Medical Facility. Hammond sends the tram back to the flight deck station so that Isaac can get to the Medical Facility and Daniels and Hammond are forced to flee the control room due to a Leaper. Isaac traces the route that the two previously took to get to the tram station and encounters a Store along the way where he can purchase other weapons along with other supplies. Isaac boards the tram for the Medical Facility and Chapter 1 ends. 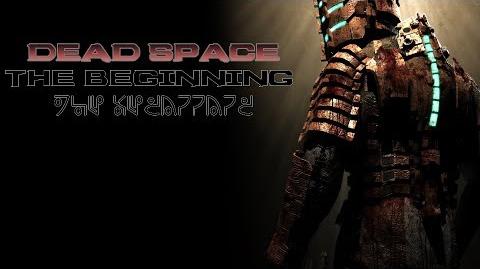