Welcome to the Sprawl

I Need Transportation
Dead Space Wiki doesn't currently have a walkthrough for this level, could you write it?
Chapter 1: Where Am I? is the first chapter of Dead Space 2 and begins where Dead Space: Ignition left off.

At the start of the game, Isaac is seen being questioned about the events that transpired on the USG Ishimura three years ago on a space station called The Sprawl. Upon being questioned, Isaac suddenly saw the visions of his dead girlfriend, Nicole and many of the other monstrosities that he saw aboard the Ishimura in Dead Space which causes him to black out. Isaac wakes up an unknown amount of time later to be informed by Franco, the protagonist of Dead Space: Ignition that he is in 'grave danger'. Franco was killed by an Infector, turning him into a Slasher. After making his way through the hospital section of The Sprawl and witnessing many of the horrors of the Necromorph attack, Isaac is contacted by Daina who informs Isaac that they need to meet because the dementia that he developed on Aegis VII will kill him.

After being interrogated on the events of the USG Ishimura, Isaac Clarke woke up in a straitjacket with Franco waking him. But, he was shaken awake when a Necromorph transformed Franco into a Slasher. Isaac is soon on the run again as multiple inmates of the asylum transformed into Necromorphs.

Narrowly escaping with his life, Isaac must find a way out of his straitjacket. He soon encountered the two security officers that immediately shoot at him, but they are killed and dragged into a ceiling vent by an unknown Necromorph. Isaac proceeds carefully as the bodies of the officers are thrown from the next air vent.

Isaac enters a room to find Foster Edgars who threatens to kill him, but soon releases Isaac from his restraints. He gives him a flashlight and a small Health Pack before violently slitting his own throat with a scalpel.

Isaac proceeds to a surgery room by taking an air duct route. There, he finds a Kinesis Module and some metal rods. Isaac is able to break out of the surgery room by smashing the windows with Kinesis and must subsequently defeat several Necromorphs by using only thrown objects.

Continuing through the Medical Bay, he finds a restrained Necromorph and a man in a surgical device. The man was about to be operated with a tissue cutter before the Necromorph outbreak. Isaac tries to free the man, but fails as a Necromorph enters the room and kills the man. Left with no choice, Isaac pulled the tissue cutter out and jury-rigs it with his flashlight to create a modified (And possibly better) Plasma Cutter and uses it to kill the Slasher.

Isaac met a man named Nolan Stross. He urges Isaac to follow him, but due to Stross having a head start, they get separated by a quarantine door that closes off as Isaac is about to enter. Stross tells Isaac to keep moving as the door closes. Meanwhile, Daina contacts Isaac and is horrified to learn that Isaac missed his opportunity to escape. Isaac argues that he doesn't need her help before being attacked by a horde of Necromorphs. Realizing that the situation is out of control, Isaac decides to accept Daina's instructions and she plots a new path for Isaac.

Isaac proceeds to a room which contains several Stasis beds. He hacks one of the beds and pulled the Stasis Module out within it, only to be immediately attacked by a Necromorph security guard. Fortunately, the hacked Stasis bed overloads and freezes the attacking Necromorph, giving Isaac enough time to finish it off.

Isaac found a Store where he changes into his old Engineering Suit, before proceeding to the marked area. He subsequently encounters a Tripod and is forced to fight it before heading up to another air duct. 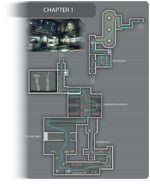 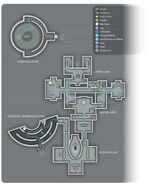 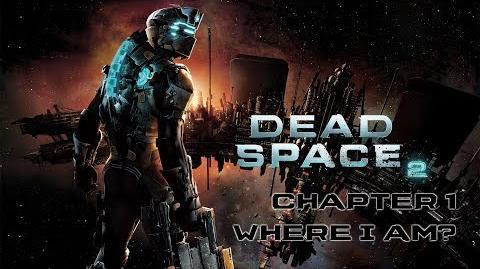 Dead Space 2 - Chapter 1 Where Am I?
Español Русский
Community content is available under CC-BY-SA unless otherwise noted.
Advertisement