Retrieve the Captain's RIG
Dead Space Wiki doesn't currently have a walkthrough for this level, could you write it?

Intensive Care is the second chapter of Dead Space and takes place on the Medical Deck.

Intensive Care is a chapter where Isaac Clarke is led throughout the USG Ishimura's Medical Deck. The core objective is to locate Captain Matthius' RIG to get the codes revealing what happened to the USG Ishimura before and after the Planet Crack. The codes are also requested by Hammond so they can gain access to parts of the ship that only the captain or high-ranking officers can enter. The ship's main Morgue has been barricaded, potentially by survivors, to keep the infection from reaching the dead. Hammond informs Isaac that he must travel to the clinic and Zero-G Therapy to get thermite and a shock pad to build a makeshift bomb to destroy the barricade. On the way to get the shock pad and thermite, Isaac faces two new enemies, the Lurker and the Enhanced Slasher, made from the corpse of the Ishimura's Captain Benjamin Matthus. The bat-shaped Infector also makes its first appearance here. Isaac also comes across a recording left by Nicole that tells the state of the clinic during the infestation, which was being overrun with the wounded and dying from the Necromorph outbreak. Once finished, Hammond informs Isaac that the Ishimura's Engine is out of fuel and will soon enter a decaying orbit towards the planet, so then Isaac heads off to the Engineering Deck to see what he can do.

On this deck, Isaac also gains the Kinesis Module. He is given it by an insane survivor, who talks of having foreseen Isaac's arrival, and kept the Kinesis Module for him to take. She dies shortly after giving it to Isaac though.

Isaac exits the tram and enters the tram station where he immediately discovers a blindfolded women sitting beside a corpse she refers to as McCoy, she claims to have foreseen Isaac's arrival (despite having no idea who he is) and passes him the Kinesis Module before dying. Isaac then uses the Kinesis Module to remove a small barricade blocking his path. On his way to the morgue, Isaac picks up his first Schematicand is contacted by Hammond for the first time since he witnessed the Leapers chase Hammond and Kendra away.

Hammond tells Isaac that he has lost Kendra and that the medical crew have barricaded the door to the emergency wing that Isaac needs to pass through in order to reach the morgue. He tells Isaac that he can use thermite from Medical Storage and a shock pad from Zero-G Therapy to create a bomb to destroy the barricade. Isaac passes through the Research Wing on his way to get the Thermite and a quarantine is activated that traps him in the Main Lab. Isaac battles variants of Slashers, one of which has armored legs, on both stories of the Main Lab, and lifts the quarantine. On the lower level, Isaac finds a video log of the Captain discussing something called The Marker with Dr. Terrence Kyne and also an audio log of Dr. Challus Mercer expressing his scientific fascination with the Necromorphs. The door to the room containing thermite is unaccessable through the Main Lab, so Isaac takes the long way around which leads him to the Biological Prosthetics Center where he witnesses a man being killed by a Lurker. Isaac kills several Lurkers and retrieves the thermite, the door then unlocks so he can return through the Main Lab and back to the barricade.

He then passes through the Imaging Diagnostics Wing where he witnesses a man killing himself by smashing his head against a wall. He enters a room and uses Kinesis to move a cylindrical capsule containing a corpse to the other side of the room and inserts a power box into the wall via Kinesis in order to power up a cargo lift. He takes the cargo lift up a level and uses the top of the capsule to cross two gaps, this allows him to enter the Zero-G Therapy. He passes through a vacuum and interacts with a monitor that disables the gravity of the room that Isaac is in. He travels to the other side of the room and inserts another power box which gains him access to the room containing the shock pad which he acquires. While returning to the barricade, Isaac has both his first Zero-G encounter with the Leapers, and his first vacuum encounter with the Slashers. He also comes across a small form of Necromorph called the Swarmer, which travels in large numbers. Isaac returns to the barricade and destroys it with the newly constructed bomb. He then immediately finds a recording made by his missing girlfriend, Nicole, suggesting that she is (or at least was at some point) in the Medical Facility when the outbreak started.

After passing through the Clinic, through the Emergency Room, through an IR Hallway (which requires a power box insertion to enter) and into the Intensive Care room, Isaac witnesses a woman kill a man with a blade before slitting her own throat. In both this room and the Morgue are logs made by Dr. Kyne once again discussing the Marker and how it may be responsible for the outbreak. A large soundwave travels through the corridor leading to the morgue causing damage to the walls as Isaac passes through. Once Isaac has taken an elevator down to the Morgue, an Infector transforms the Captain's body into an Enhanced Slasher and he is forced to kill them both and retrieve the Captain's RIG. Isaac then sends the access codes to Hammond who tells him to head back to the tram while he checks the ships records.

On his way to the tram, Isaac is once again contacted by Hammond who tells him that he was forced to trap a Necromorph in a damaged escape pod because it entered the Captain's nest; he lifts the executive lockdown and discovers that the outbreak started on the surface of Aegis VII before spreading to the ship. He also discovers that the ship's engines are offline and that its orbit is decaying, he tells Isaac to take the tram to the Engineering Deck to fix the new problems and the Chapter ends when Isaac enters the Tram. 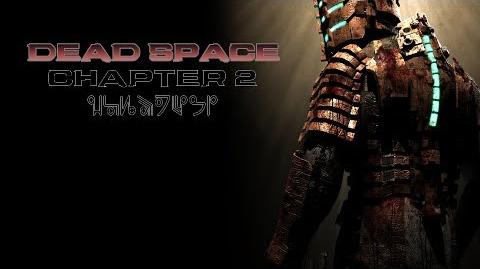