Refuel and start the Engine/Activate the centrifuge
Dead Space Wiki doesn't currently have a walkthrough for this level, could you write it?

Course Correction is the third chapter of Dead Space and takes place on the Engineering Deck.

After landing at the Engineering Deck, Engineer Isaac Clarke receives a video message from Zach Hammond. With a concerned look, Hammond informs Isaac that the USG Ishimura is out of fuel and must be refueled. Isaac must also get the Gravity Centrifuge operational in order to stop the USG Ishimura's decaying orbit from crashing them into Aegis VII.

While exploring the Machine shop, Isaac begins to unravel the dementia of the early colonists by an audio log that details a man named Handerson who pulled all of his teeth out before committing suicide, likely suffering from extreme paranoia and / or schizophrenia.

When Isaac exits the tram that he boarded at the end of Chapter 2, Hammond tells him that the Engines are offline because they have no fuel and the Gravity Centrifuge is offline meaning that trillions of tons of rock from the planet crack are pulling the Ishimura toward Aegis VII. Isaac's new objective is to solve these problems. In the main Engineering room, Isaac finds an audio log created by an engineer named Jacob Temple who is trying to fix the same problems as Isaac. After refueling the 1st Engine using Kinesis to pull a switch down, Isaac has to use a Gondola to gain access to the 2nd Engine refueling switch. A large number of Slashers and Enhanced Slasher ambushed Isaac once he exits the Gondola. When he activates the second engine refueling switch, he finds another audio log from Temple who believes that someone (possibly a unitologist) sabotaged the fuel lines. Had Temple not fixed them before Isaac's arrival, it would be up to him to do it.

When Isaac returns to the Main Engineering Room, an Infector turns a corpse into an Enhanced Slasher. He takes an elevator towards the Centrifuge and, while passing through a decontamination room, is attacked by Leapers and Slashers. There are two spherical holes that are torn through a corridor that Isaac passes through on his way to the Gravity Centifuge which he enters in Zero Gravity. After killing another pair of Leapers, Isaac uses his Stasis Module to slow the spinning roters down on a pair of clutches and uses his Kinesis Module to insert them into the Centrifuge which prompts more Leapers to attack. Isaac interacts with a monitor that activates the Centrifuge via his RIG which also removes the oxygen from the room. In order to leave the room, he had to not only battle the Necromorphs, but also avoid a spinning mechanical appendage while conserving a limited oxygen supply. It is on his way back to the Main Engineering Control Room that Isaac discovers the source of the holes in the corridor - a Drag Tentacle. Isaac makes short work of it and is contacted by Kendra Daniels for the first time since Chapter 2: Intensive Care. She tells both him and Zach Hammond that she barricaded herself in the Computer Core. She discovered that the colonists' dementia was caused by a certain artifact that they found and she was unlocking the door that Isaac needs to pass in order to reach the Engine Chamber.

Isaac passes through the newly opened door and through a Zero-G vacuum when he comes across a multi-level room filled with a substance known as The Corruption. In this room, he finds another audio log made by Jacob Temple which he says that he is giving up on his attempt on fixing the ship and his new goal is to find his girlfriend, Elizabeth Cross and escape from the doomed ship. In the middle level of this large room, Isaac watches a man die who appears to have been killed by the Swarmers and on the lower level the men who are attached to the wall by the Corruption wailed in pain and Isaac is powerless to help them (These men will later be transformed into Guardians). He uses the Stasis Module to pass through another malfunctioning door and defeats some Necromorphs before entering the Engine Room. After killing Slashers who are dragging the dead crew members away, Isaac battles his first Pregnant before peparing the engines for the engine ignition sequence. It takes some time for this to happen and Isaac battles a large number of Necromorphs (Including the female Slasher) before he can ignite the engines.

Finally on his way back to the tram, Isaac is contacted by Hammond who wants to take the ship back into geostationary orbit, but Kendra tells them that they need to activate the ship's ADS (Asteroid Defense System) in order to pass through the debris field caused by the Aegis VII planet crack. Hammond tells Isaac to meet him at the Bridge and he makes his way back to the tram when he is contacted briefly by his missing girlfriend, Nicole Brennan. There is one more Slasher to kill before Isaac boards the tram and ends Chapter 3. 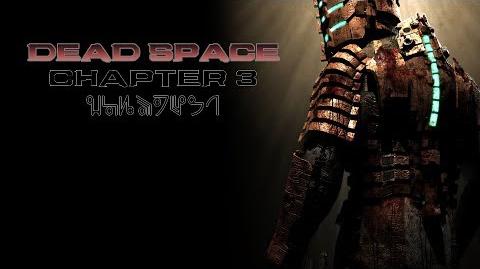