Chapter 3: I'm Back to Walking Again

I'm Back To Walking Again

Going to Church
Dead Space Wiki doesn't currently have a walkthrough for this level, could you write it?

"Isaac: Daina, I need a new route.
Daina: What happened? I thought we lost you.
Isaac: Unscheduled stop. Where am I?"
—Conversation between Isaac and Daina

Chapter 3: I'm Back To Walking Again is the third chapter of Dead Space 2.

This chapter spans several locations: The Concourse Mezzanine, Cassini Towers, and The Church of Unitology.

Faced with no where else to go, Isaac must turn to Daina who instructs that his next goal lies in the Cassini Towers, which houses the Church of Unitology, where she promises to offer aid and support to Isaac. On his trek, he discovers many desolate apartments complexes, abandoned malls, and no other sane person in sight. After making it through the Towers, he comes across the main entrance for the Church through which he enters to escape the barrage of Director Tiedemann's gunship.

After surviving the train crash, Isaac contacts Daina and asks her for a new route. Shocked to learn that he's off track, she tells him of a new route to get to Cassini Towers that he may not like. Before she can say anything more, Tiedemann jams her signal forcing her to end the call. With no other choice, he leaves the storage room and heads into the only service hallway. Seeing the shadowy first appearance of the Pack, the lone Pack member runs away before Isaac can follow it--leaving only a Slasher feigning death in his path. Exiting the hallway, Isaac comes to a shopping complex with numerous stores, one of which titled "Fashion Kid" has a blown-out door. Moment later, several members of the Pack emerge and attack Isaac. After a rough encounter he receives a RIG call from Nolan, who asks Isaac in a rushed manner about "seeing the symbols" and "him". But before Isaac can ask any questions Nolan ends the video.

Taking an elevator up to the Concourse Mezzanine Isaac encounters a single member of The Pack escaping over the railing. Outside the large glass window, Director Tiedemann's evacuation order can be seen playing on repeat on the massive holoscreens. After, Isaac contacts Daina for information about the "crazy guy that keeps contacting him", for which she answers that he was a patient in the same psychiatric program as Isaac. She warns him that Nolan's a psychopath; he murdered his own wife and child. After hacking a control panel, Isaac takes an elevator up to a Unitology Recruitment Center, where she instructs he will have to go through a waste disposal system as a shortcut to Cassini Towers. Reaching the main lobby, he encounters a mixed array of Necromorphs, especially an Exploder, which if shot sends them and Isaac out into space. The Pack will then attack Isaac before he activates the maintenance tunnel leading to the waste allocation system.

Upon reaching the lower deck of the waste system, a RIG log from an unknown worker plays instructing Isaac about the advantage of using Kinesis to attack Necromorphs with their own limbs. Isaac then heads for the control room for Waste Compression Chamber 752 and shuts it down, allowing him to safely head into the chamber. Before reaching the chamber, he's attacked by a Puker, multiple Slashers and an Exploder. By manually opening the passageway to the Cassini Apartments, Isaac navigates through the Zero-G channel and heads towards his goal.

Entering the maintenance hallway, the power cuts off, forcing Isaac to replace the power supply to the elevator to Cassini Towers--encountering a Slasher on the way through. Making his way into the apartment complex, evidence of Unitologists influence is everywhere. Navigating through abandoned rooms, he encounters several Necromorphs before coming to a room with a working music box. Suffering from a dementia hallucination of Nicole, Isaac confronts the delusion saying "you're not Nicole!", before proceeding to the main atrium. There, Tiedemann's gunship tracks Isaac and Daina urges him to hurry. Bursting through a door, a Slasher attacks Isaac on his way down the facility. Coming to the bottom level, an Infectors, Pukers, and Exploders all attack Isaac as he heads into the main Church corridor. Inside the access chamber, Tiedemann's gunship starts gunning down Isaac and a panicked Daina yells for Isaac to enter the Church of Unitology. 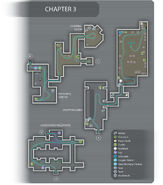 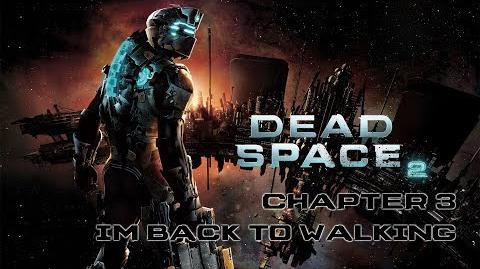