Power and restart the ADS Cannon
Dead Space Wiki doesn't currently have a walkthrough for this level, could you write it?
Obliteration Imminent is the fourth chapter of Dead Space and takes place on the Bridge.

This level sees Isaac trying to keep the Ishimura from being ripped apart from the upcoming meteor shower since the Ishimura's orbit is not decaying anymore. Isaac makes it to the bridge, where he runs into his largest enemy yet: a Brute. The ADS Cannon's three main power sources are offline and Isaac has to turn them back on. When all three sources are turned on the player will have to head to an ADS Cannon to control it until Hammond turns the defense system back on. The player will have to pass a Zero G environment (the starboard hull) to get to the cannon at the other side but use caution; hundreds of meteors are still striking the hull and even a glancing hit will cause death. Fortunately the section of hull he must cross is dotted with bulkheads that will protect Isaac from the periodic barrages. When Isaac crosses the hull and enters the firing pit for ADS Cannon 47 he takes manual control of the cannon while Hammond works to restore the ADS Grid's automated tracking system. During this period Isaac must destroy as many asteroids as possible. The Cannon can fire both barrels on either Semi-automatic or fully automatic. Once Isaac succeeds in saving the ship from asteroids, Kendra appears with news of a threat of poisened air coming from the greenery of the Hydroponics Deck.

Having taken the tram from the Engineering Deck to the Bridge, Isaac is contacted by Hammond who tells him to meet him in the Captain's Nest and also tells Kendra to get into the ship reports but she only responds with questions about The Marker and seems to believe he is withholding information about it. Hammond only claims to know that the crew brought The Marker into the Cargo section of the ship and that they believed it to be of alien origin. Kendra's insistence that Hammond is lying is ignored when he realizes that the ship has just entered the debris field. As Isaac heads near the Main Atrium, an unknown form of Necromorph punches a hole through a window and screeches before disappearing. A piece of debris crashes through the ships hull and leaves a huge hole on many levels of the Atrium right before Isaac reaches the Captain's Nest where Hammond is waiting. Once there Hammond tells him that the main power routing to the ADS is shot and that he will have to re-route it manually through three junction boxes in order to activate the primary cannon. Also, the elevator to the lower levels of the Atrium needs to be activated from the Bridge Security Room; before Isaac leaves he gets a warning from Hammond that he spotted a Necromorph of considerable size. The Necromorph that Hammond previously trapped in an escape pod in Chapter 2: Intensive Care turns out to still be alive so Hammond launches the pod in order to stop it from breaking out into the Captain's Nest.

The Necromorph that damaged the window earlier turns out to be a Brute. When Isaac heads to Bridge Security, the Brute smashes the doors open and Isaac is forced to defeat it. In a blood stained Security Room, Nicole's face mysteriously appears on a monitor asking him to 'make us whole again' before disappearing. It is in this room that Isaac activates the Atrium elevator. On the way down, he hears a woman scream and finds a video log of Dr. Kyne attempting to relieve Captain Matthius of duty (as he is a crazed Unitologist who wants to deliver The Marker to the Church of Unitology) and accidentally stabs him in the eye with a needle while trying to sedate him. Kendra contacts Isaac when he exits the elevator to tell him that some of the gravity plating is malfunctioning and from this point on he will have to avoid certain areas with distortion coming from the floor. He navigates through the Ship Systems Room and removes a small barricade using Kinesis when a second Brute tears through a metal panel and attacks him. At the back of the room is where the debris that breached the hull landed and it has dislodged two harmful electric cables that Isaac needs to slow down with Stasis in order to pass and activate one of the three junction boxes. Several Leapers attack him when he returns to the Main Atrium level. Then he takes a second opposite elevator to either Level 01 or 03.

On level 01, Kendra contacts him to tell him that the Necromorphs are bio-recombinators which absorb dead flesh and mold it into new forms and also that The Corruption is a habitat changer. A door burst open in a Mining Administration Hall which creates a vacuum but Isaac passes through into the Admin Room. Corpses are hanging from the ceiling in this room and there is another crater caused by the debris, the monitor that controls the junction box is at the back of the room and once it is activated, an Infector enters the room. Isaac then returns to the elevator.

On level 03, the vanishing man appears and whispers 'make us whole again' and when Isaac approaches him, he runs off. After killing a Pregnant, he re-routes the power to the last junction box. Hammond contacts him and tells him that, although they have enough power, the ADS auto targeting system is offline due to faulty data cable. He needs Isaac to aim it manually until he can replace it. Isaac then takes yet another elevator up and Hammond tells him to avoid asteroids while he crosses the ship exterior to reach the cannon. The asteroids stike the hull at regular intevals and Isaac uses some bulkheads to shield himself. Once he reaches ADS Cannon 47, Isaac has to shoot the asteroids in order to maintain the hull's integrity until Hammond manages to repair the cable (which switches the Cannon back to automatic). Isaac travels back across the exterior and is attacked by some Leapers when Kendra tells them both that the oxygen levels are falling because something is poisoning the Hydroponics Deck oxygen production. Kendra tells Isaac to return to the Medical Deck and create a poison that she mentally fabricated of in order to kill the toxic Necromorphs and Hammond says he is going to Hydroponics to try and slow the Necromorphs down long enough for Isaac to create the poison.

On the way to the tram, Isaac encouters several segments of a Divider and female Slashers. Once again, the Chapter ends when he boards the tram. 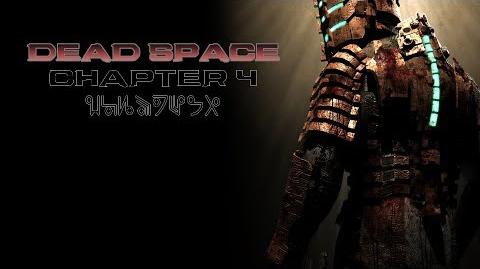