Create poison to kill the Leviathan
Dead Space Wiki doesn't currently have a walkthrough for this level, could you write it?
Lethal Devotion is the fifth chapter of Dead Space and takes place on the Medical/Science Deck.

After repairing the ADS Cannons, Kendra informs Isaac that something is poisoning Hydroponics. Isaac heads over to the Chemical Labs to make a poison to kill the Leviathan. Isaac runs into the crazed Doctor Mercer who makes this objective easier said then done. Doctor Mercer talks about his own horrible creation, the Hunter and releases it from it's Stasis tube halfway through the chapter. The Hunter stalks you as you retrieve the materials throughout the rest of the chapter. After retrieving the materials and mixing the poison, Isaac fights the Hunter and ultimately freezes the creature in a cryogenic tube.

Chapter 5 sees Isaac returning to the Medical Deck, a place that he last visited in Chapter 2: Intensive Care. Kendra informs Isaac that the previously mentioned contaminated air is spreading faster than expected (As even she could smell it) and instructs him to retreive the necessary chemicals from the Chemistry Lab. To achieve this, she will hack the door that leads directly to the chemical rooms. As Isaac passes through the Security Station (The area where he previously destroyed the barricade), an unknown presence speaks to Isaac, telling him that he could not stand in the way of 'God's plan' The voice's origin is unknown and the voice seemed too clear to be a hallucination. Kendra notices that since Isaac's original departure, the doors in the area are reprogrammed and notes that the three survivors may not be the only ones around. After defeating some Lurkers in Imaging Diagnostics, Isaac passes the cylindrical capsule which is now malfunctioning, jerking back and forth with sparks and scrapes. Around this corner, Isaac encounters his first Guardian, which guards the main elevator upwards. After dispatching the beast, Isaac travels to the second floor of Imaging Diagnostics and crosses the top of the capsule, this time however, freezing it with a carefully timed shot of Stasis. Kendra contacts Isaac as he enters Zero-G Therapy and informs him that she is searching for the records for a Necromorph DNA sample that Isaac will need for the poison extract. Isaac during this time happens upon an audio log from a Dr. Mercer, discussing about his test subjects and his attempts at 'limb regeneration'. Dr. Mercer appears delusional or insane as he notes that his patient is "compliant" despite clear desperation and fear sounding from the patient in the background. Kendra overrides the lock on the door to the Chemistry Lab and Isaac acquires the chemical capsule that would hold the poison that they would create. It is here that Isaac encounters Dr. Challus Mercer who views him through a far window to the right. Challus informs Isaac that the human race died out years ago. The humans just had not 'accepted it' yet. Explaining that God's plan is to place the Necromorphs as the successor to the humans, he releases a large Necromorph upon Isaac which was a Hunter.

The Hunter can regenerate lost limbs in a short space of time making it impossible to kill via conventional means and Isaac must keep it at bay until Kendra can re-override the exit door that Mercer locked. At this point, the Hunter ends it's pursuit, though clearly making it's presence known through growls and roars. As Isaac moves through the Swarmers in the Imaging Diagnostics Wing, Hammond contacts him to update Isaac. He reached the Hydroponics Deck, but the air became so toxic and he could barely breathe. Luckily, Kendra located some DNA samples left over by Mercer's extensive research in the ICU to place in the poison. Her attempts to contact Hammond, however, are met with static. As Isaac enters the Intensive Care Room, Dr. Mercer applauds Isaac's persistence, but stresses that it is useless to resist the path of the Necromorphs and encourages him to embrace death before setting the Hunter on him. This time, the Hunter is accompanied by many other Necromorphs which Isaac will have to eliminate as Kendra bypasses another lock. There is another Guardian located in the ER Hallway, near the other end. One must be careful not to rush too close to this Guardian while fleeing the Hunter or risk a quick, painful beheading. To the right just before this point, however, there is a recharge station down the hall as well as an insane woman who appears to be crying over a corpse. The corpse holds a few items, but the crying woman will not react nor harm Isaac or herself. This woman is completely harmless. In a small room connected to Intensive Care, Isaac finds another audio log from Mercer claiming that Dr. Kyne is suffering from the same dementia as the colonists are, focusing on the Marker. This gives Mercer the ability to focus on limb regeneration and his own personal studies of the Necromorphs. This room held a multitude of Credits as well as some golden motherboards. Isaac finishes by collecting the required DNA sample 9797 from a control panel in the office.

This triggers Mercer to decompress the entire Medical Deck and lock Kendra out of the controls needed to turn the oxygen back on. She tells Isaac that he can fix it in the Security Station. After killing the Swarmers, Pregnants and Lurkers, Isaac switched the life support monitor on with his RIG and restored the oxygen to the deck before his oxygen supply depletes. Kendra informs him that he must return to the Medical Lab (Where the Hunter initially pursued Isaac) to finish the process of creating the poison by mixing the solution. Hammond briefly makes contact before being cut off again. Kendra begins scanning for Hammond's location. On the corridor leading to Imaging Diagnostics, Kendra informs Isaac that a survivor's report states that a massive creature entered the Hydroponics Deck. This strange creature is the cause of the degrading oxygen quality and was apparently named The Leviathan. Upon mixing the poison to completion in the Medical Bay, Kendra contacts Isaac briefly before being cut off by Dr. Mercer who is apparently contacting on the same frequency. Mercer states that he admires Isaac's persistance and Isaac deserves to see what the Hive Mind had to 'offer'. Kendra informs Isaac that he must head to the tram to travel to Hydroponics. Isaac and Dr. Mercer came face to face once again in the Cryogenics Lab which Mercer led Isaac to through the locked systems. Mercer informed Isaac about a plan  that wascreated to spread the glorious infection of the Necromorphs loose upon Earth and planned to do so soon. He sets the Hunter upon Isaac and flees. Isaac used Stasis on the Hunter and activates a monitor in the Control Booth that Mercer fled from to freeze it within a tube of cryogenesis. Kendra overrode Mercer's lockdown and Isaac accessed a secondary tram system to get to Hydroponics. The chapter concluded. 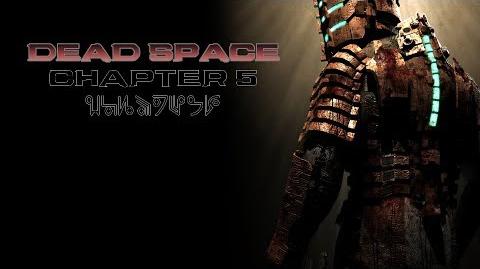