Purify the poisoned air/Kill the Leviathan
Dead Space Wiki doesn't currently have a walkthrough for this level, could you write it?
Environmental Hazard is the sixth chapter of Dead Space and takes place on the Hydroponics Deck.

In this chapter, Isaac is in the Hydroponics Deck to fix the air quality because of the Wheezers poisoning the air. After killing all the Wheezers, Isaac resets the air filtration system on a control panel, opening the doors to the Food Storage. Isaac walks down the corridor to a door that is sealed shut. Isaac feeds the poison on the filtration system, killing the tentacles blocking the door, opening it. However, since the poison failed to kill the Leviathan, Isaac is then forced to fight it. After Isaac finishes off the Leviathan, Kendra says that she "lost" Hammond's RIG signal. Kendra finally tells Isaac she has a plan on the Mining Deck, to release a beacon on an asteroid in the mining bay.

After creating a poison capsule in Chapter 5: Lethal Devotion, Isaac enters the Hydroponics Deck and immediately discovers an audio log made by Elizabeth Cross (girlfriend of engineer Jacob Temple), where she simply states that everything in the deck is normal but objects to the Captain's no-fly order. This suggests that the toxic Necromorphs spread very rapidly once the infection reached the colony. On the right side of the corridor leading to an elevator is a bathroom littered with dead bodies. Isaac takes the elevator up to the Sapling Room and meets Hammond who is clearly affected by the toxic air. He tells Isaac that the Leviathan has locked itself in Food Storage and that some of the crew have been 'transformed' into what are known as Wheezers. Kendra tells Hammond to leave Hydroponics as he cannot help in his unhealthy condition. When Isaac is in the Main Air Control Room, Kendra tells him that he has to kill eight Wheezers in order to pass through the door to Food Storage. There are two ways to go from here: The East Tower and The West Tower.

In The West Tower, Kendra says that, despite being glad to know he's alive, she still doesn't trust Hammond. Hot pipes cause trouble for Isaac in the hallway leading to the West Grow Chamber but he dodges them and progresses up an elevator. On the catwalk above the hallway is a Slasher and a door to the chamber. Once in the West Grow Chamber, Isaac is attacked by a very large number of Slashers and Lurkers but manages to defeat them all. The nearest Wheezer is in Inner Greenhouse A and Isaac will have to rely on his air supply until he has killed the toxic Necromorph (as he will with every Wheezer); upon exiting the greenhouse, he is attacked by a Pregnant. The next Wheezer is in Greenhouse B and its death prompts an Enhanced Slasher and Lurker to attack.

The next two Wheezers are on the upper floors of the chamber. In the Control Room of the second floor, Nicole mysteriously speaks from an unknown location and asks Isaac once again to 'make us whole', he kills the third Wheezer and deals with a pair of Infectors. Also on floor 2 is a Refrigarated Room - on the way to which, Isaac has to battle some Exploders for the first time. The several Refrigerated Rooms themselves are actually in zero gravity and contain some Lurkers; there is also doors which Isaac opens with his Kinesis Module in order to reach each room. The last room leads to the Air Filtration Room and back to normal gravity. Yet another audio log from Dr. Cross is located in this room, in this one she is trying to locate her husband amidst the emergancy. The filtration tubes on the bottom level of the room fill with flame at regular intevals and Isaac has to pass through them whilst disabling door panels. The fourth Wheezer is killed at the end of the filtration tubes and Isaac takes an elevator back to level one of the West Grow Chamber where he kills more Necromorphs before returning to the Main Air Control Room.

In the East Tower, a Guardian protects an elevator leading to a catwalk which leads to the East Grow Chamber. This Grow Chamber is considerably more affected by The Corruption and is placed under quarantine as a result. After killing a Brute, Isaac destroys another two Wheezers in Inner Greenhouse A and the Feeding System. On floor 3 of the chamber, the penultimate Wheezer simply sits on the balcony until Isaac kills it and on floor 2, an audio log shows Dr Cross' account of the Leviathan's entrance to the ship. On the same level, Isaac is attacked by a Drag Tentacle while heading towards the Refrigeration East Room. The Room has been drastically transformed by The Corruption to the point where it is unrecognisable. Another log reveals that Jacob Temple came to Hydroponics in search of Elizabeth but was unsuccessful, he says that he is heading to the Mining Deck in search of her. Refrigerated East is a Zero-G environment with Lurkers just like it's west counterpart but also contains a malfunctioning electrical generator that must be hit with Stasis before Isaac can progress. When Isaac kills the last Wheezer, Kendra tells him to restart the oxygen recycling via the Atmosphere Control switch so that he can enter Food Storage and use the poison on the Leviathan. She also makes a point that she saw her brother on the security monitor which she claims 'isn't possible' and suggests that she is suffering from the same hallucinations as the crew. Due to the absence of the Wheezers, the East Grow Chamber quarantine is lifted but Isaac still has to deal with a few Necromorphs on his way back to the Main Air Control Room.

After another obscure message from Nicole, Isaac reactivates the Air Recycling System and enters Food Storage. The last of Dr Cross' logs in this chapter reveals that she is also heading to the Mining Deck and, after listening to it, Isaac enters the poison into the filtration system. However, the poison only destroys the tentacles blocking the Main Chamber and partially damaged the Leviathan so Isaac has to enter the Chamber and kill it himself. The creature is killed when Isaac dismenbers it's three huge appendages and launches it's explosive pods back into its 'mouth'. Once he does this, Kendra tells him that she cannot locate Hammonds RIG but she has located an SOS beacon in the Mining Deck that they can use to send out a distress call. Isaac heads to the tram and takes it towards the Mining Deck and Chapter 6 ends. 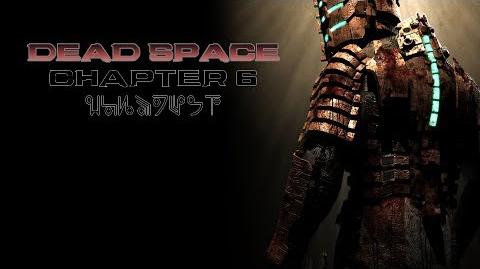