Chapter 7: Into the Void

Launch an S.O.S. beacon
Dead Space Wiki doesn't currently have a walkthrough for this level, could you write it?
Into the Void is the seventh chapter of Dead Space and takes place on the Mining Deck.

Isaac has been instructed by Kendra to get down to the mining shaft and attach an S.O.S. Beacon to an asteroid in the mining deck so the three of them can call for help and escape the ship.

Along the way, Isaac encounters Nicole, who appears to be alive and well. She helps Isaac get into the room containing the S.O.S Beacon. She could not reach him due to the gap of space between them, but promises to find another way. Isaac then goes out to the asteroid within the ship, attaches the beacon, destroys the Gravity Tethers holding it in place, and launches it into space.

It is then that Kendra tells Isaac that the comms array is not responding, and to head to the bridge to get it working, otherwise they cannot respond to anyone responding to the beacon.

After defeating The Leviathan in Chapter 6: Environmental Hazard, Isaac arrives at the Mining bay with a new goal - send out a distress call. Kendra tells him that there is an asteroid waiting to be smelted in the Mining Bay that he could attach the SOS beacon to and launch into space to make a clean broadcast. She also says that the beacon is located on the Maintenance Sub Deck and that the asteroid has to be launched from the Control Room (which is locked and can only be opened by an Emergency Access Key on the Processing Sub Deck). Isaac passes through the RIG Room and calls an elevator in which a security officer dies of massive blood loss. The Mining Sub Deck is offline according to Kendra so Isaac goes to the Processing Sub Deck while she tries to fix the problem however the elevator ride coincides with the arrival of several Necromorphs. At the entrance of Processing, a log from Jacob Temple reveals that he met his girlfriend Elizabeth Cross but couldn't find a single space worthy vessel in the bay so the two are also looking for a beacon. Isaac battles some Slashers and a Pregnant in the Antechamber before picking up a log in Mineral Processing that explains that an asteroid broke into pieces when the Centrifuge went offline and the pieces need to be removed. One of the pieces ripped a hole through a wall which gives Isaac an entrance to the Mineral Processing Room containing the gravity beam used for transporting minerals for smelting. The room has no gravity and, like other Zero-G environments, contains some Lurkers and Leapers. Isaac must 'dump' the floating asteroid pieces into the gravity beam in order to restore gravity and open the Processing Control Room. After destroying the four asteroid pieces and battling the Necromorphs, Isaac: restores gravity, kill Slashers, Pregnants and Exploders, and retrieves the Mining Access Key from the Processing Control Room.

Kendra tells him to use the key to get into the Control Room and launch the asteroid once he has attached the beacon, she also reveals that the colonists' dementia only begun after they extracted the artifact referred to as the Marker. He takes another elevator ride down to Deck D: Maintenance (during which a revived Hunter can be glimpsed on Deck C which was last encountered in Chapter 5: Lethal Devotion) and kills some Infectors in the Repair Room. An audio log from Dr. Kyne suggests that he is losing his sanity as he has held a man hostage and demanding the keys to the Cargo Bay despite being in Processing, he says it is 'imperative' that he gets to the Marker. Isaac passes a half formed Guardian and rides a gondola (while killing Pods) to the Equipment Maintenance Bay. When the gondola stops, Nicole appears in person for the first time in the game; she claims that she can help him and tells him to follow her. Despite the gap between them, Isaac is able to defend her from Slashers and Lurkers while she unlocks the door to the Storage Room containing the beacon; she unlocks it and tells him that she will eventually find a way to get to him and says she loves him. When Isaac gets the beacon, Kendra tells him to attach it to the asteroid and implies that Hammond is dead considering that he hasn't been in contact since leaving the Hydroponics Deck. Isaac returns to the elevator and Kendra tells him that she has lifted the lockdown on Deck C and that he will need to disable some gravity tethers in order to launch the asteroid. Deck C is full of Necromorphs that Isaac kills while transporting a power box in order to power up an elevator which takes him to the Mining Bay. After his first encounter with Enhanced Leapers, Isaac disables the gravity tethers both on the interior and exterior of the ship in zero gravity and plants the beacon on the asteroid while avoiding two smelting gyrators. He then returns the elevator power box back to the Extraction Room so that he can take a second elevator to the Mining Control Room which he has the key for. When Isaac launches the new distress call, Kendra tells him that the Array Receiver isn't responding so Isaac will have to return to the Bridge and fix it, also she tells him that she is having more hallucinations of her brother but the conversation is cut short when Isaac battles Necromorphs in a temporary quarantine. He then takes another hazardous elevator ride back up to Deck A, and takes the tram toward the Bridge. 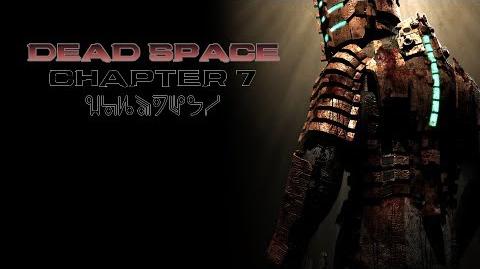