Chapter 7: Power from the Sun

Power from the Sun

I Need Some Transportation

Through the CEC
Dead Space Wiki doesn't currently have a walkthrough for this level, could you write it?

"Isaac: Ellie! Come in!
Ellie: Isaac! We have to cross to the Government Sector before they cut us off! You'll never make it down here in time!
Isaac: I'll be there! I'll be there!'"
—Isaac to Ellie, just before the HALO jump

Chapter 7: Power from the Sun is the seventh chapter of Dead Space 2.

Isaac ventures up to the Solar Array in a bid to activate life support and power in order to take a train to Government Sector.

Isaac moves from the Transport Hub in the CEC Facility towards a lift that will take him to the Solar Array. Reaching the lift Isaac finds out that it is floating at the bottom of the elevator shaft so he flies down and raises it up with some Rocket Canisters. Boarding the lift he starts going up only to be attacked by multiple Tripods which he successfully fights off. Finally reaching the Solar Array he navigates the Facility guarded by ANTI. After passing the booby trap filled rooms he reaches the Mainframe of ANTI and successfully deactivates it. But with the computers off now he has to align the Panels manually. He then proceeds to the Solar Panels where he is confronted by yet another Nicole Hallucination in the Rocket Chair Room. Exiting the room he starts to align the panels and also fights off a Nest. Now with the power online he goes back to the Rocket Chair Room only to be informed by Ellie that a large group of Necromorphs is destroying everything in their path. Fearing that they will be cut off from Gov Sec Isaac sits down in the Rocket Chair and starts a head down dive towards the Sprawl's surface. Dodging large debris Isaac reaches the surface and proceeds to meet up with Ellie and Stross. 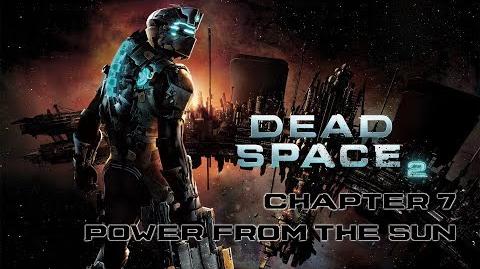