Make contact with the USM Valor
Dead Space Wiki doesn't currently have a walkthrough for this level, could you write it?
Search and Rescue is the eighth chapter of Dead Space and takes place on the Bridge.

In this Chapter, Isaac must fix the Comms Array and destroy The Slug in order to contact the USM Valor. Unfortunately, the Valor meets its demise when it recovers the escape pod that was launched back in Chapter 4. It crashes into the Ishimura causing a signal disruption which allows Hammond to contact Isaac. Hammond informs Isaac and Kendra that there is a shuttle they can use to escape although it requires a singularity core which can be salvaged from the ruins of the USM Valor. Isaac heads to the tram which will bring him to the debris of the USM Valor.

The chapter begins in the Bridge - the area last visited in Chapter 4: Obliteration Imminent with Kendra informing Isaac that the USM Valor has responded to their distress signal, but she cannot respond back until the Comms Array is fixed. She instructs Isaac to head for the Comms Control Station while she hacks the door to Communications.

On his way to Comms Control, Isaac is trapped in the Main Atrium by a quarantine and forced to battle large amounts of Exploders, Enhanced Slashers and Enhanced Leaper. When the quarantine lifts, Isaac takes the elevator to Floor 03 (Floor 01 is offline and the other Atrium elevator is covered with The Corruption) when Kendra tells him that the door to Communications is now unlocked and that someone is listening in on their conversation. Isaac kills a pair of Guardians before reaching Communications. In the Communications Hall, a man dies as a fully formed Divider rounds the corner and attacks; Isaac kills the Divider then uses his Kinesis Module to remove a barricade and rides a Gondola to the Comms Array. Upon arriving in Communications, Isaac finds the Comms Array to be badly damaged, but still workable. Once the six working dishes are aligned symmetrically in Comm Array Chamber (which is infested with Enhanced Leapers) and the control panel is activated, an automatic video log will be played coming from the USM Valor, indicating that they had picked up an escape pod that was jettisoned from the USG Ishimura. Ironically, this is the same escape pod that Zach Hammond had jettisoned back in Chapter 4, which contained a Necromorph - Pod 47. This message will play on a loop until the Ishimura responds. Kendra realizes the crew of the Valor are in danger and tries to open the blast doors to boost the signal and warn them, but she gets an error. She notes that something big is blocking the blast doors, and instructs Isaac to go destroy it using ADS Cannon 48.

The 'object' blocking the blast door turns out to be a large Necromorph called The Slug, Isaac has to shoot off all five of the Slug's appendages while deflecting the pieces of debris that they throw at him. After destroying The Slug using the cannon, it's corpse detaches from the blast door and drifts into space so Kendra boosts the signal in an attempt to warn the Valor not to open the escape pod. The video feed coming from the Valor shows it is too late, as a marine is sliced from behind by a Slasher, along with other bloodbath scenes. Distracted by the video, Isaac and Kendra realize too late that the Valor is headed directly for the Ishimura, and the two will collide. Kendra yells for Isaac to get out of there, but the ships collide, and the resulting explosion knocks Isaac out for a while.

Isaac comes to with Nicole’s original video from the beginning playing, as Isaac's suit is malfunctioning. This video cuts out as Hammond sends his own video for the first time since he left the Hydroponics Deck in Chapter 6: Environmental Hazard, revealing that he is alive and used a few health packs to heal himself. He also points out that someone had been blocking his RIG signal remotely and that, because of the crash, he is now no longer blocked. He tells Isaac and Kendra that he is aborting the repair mission, and is intent on getting them out. He notifies them of a shuttle on the Crew Deck that needs a new Singularity Core, which they can probably salvage from the Valor's ruin. He informs Isaac to meet him there, and the video ends. After killing a Pregnant and another Divider, Isaac takes the tram to the Cargo Hold - the area where the Valor has crashed. 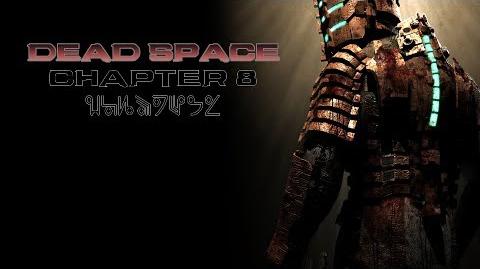