Chapter 8: Through the CEC

Power from the Sun

Transportation Preparation
Dead Space Wiki doesn't currently have a walkthrough for this level, could you write it?

" Ellie: Isaac! This way! The train's this way!

Ellie: Are you crazy?! I barely made it out of there with my life! That place is swarming with those things!

[ Suddenly, the cries of the infants alerts Issac]

Chapter 8: Through the CEC is the eighth chapter of Dead Space 2.

This chapter spans the entire CEC Facility and part of Fuel Processing.

Chapter 8 involves Isaac traveling through the main CEC area which he goes through many small, narrow rooms and seeing Stross and Ellie who are split by a wall with glass. Ellie tries to help Isaac catch up with them by stopping the mechanics and gears in the Zero-G area. However, Tiedemann reactivates them and forces Isaac to either use Stasis or move carefully around the mechanics. After the Zero-G maneuvering is done, he ends up on the other side of the walled area and catches up with Ellie after dealing with some injured Necromorphs. 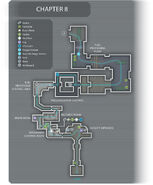 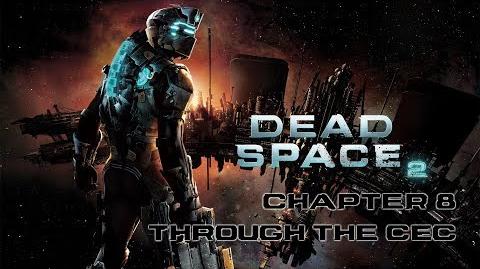 Dead Space 2 - Chapter 8 Through the CEC