Board the USM Valor and find its Singularity Core
Dead Space Wiki doesn't currently have a walkthrough for this level, could you write it?
Dead on Arrival is the ninth chapter of Dead Space and takes place on the Ore Storage Deck of the USG Ishimura and inside the USM Valor.

This chapter is mainly positioned on board the USM Valor, a Marine spacecraft. The ship has been already infested by Necromorphs after picking up the escape pod with a Slasher inside it, fired from the Ishimura by Hammond in Chapter 4. Isaac must find a Singularity Core in order to repair the shuttle discovered on the Ishimura by Hammond. Later, Isaac finds the Core and Hammond is killed by an Enhanced Brute; Isaac kills the Brute and manages to escape the exploding vessel with the precious component.

Chapter 9 sees Isaac Clarke entering the Cargo Hold in order to board the wreck of the USM Valor and salvage it's Singularity Core which was needed to fix a shuttle in the Shuttle Bay. Firstly, Zach Hammond tells Isaac that he is on board the Valor and he found the munitions log that suggested that the ship was prepared for much more than a routine patrol when it picked their distress call up. Then, Kendra Daniels tells Isaac that Hammond's RIG was lost once again. The Valor crashed into the Zero-G Ore Storage Chamber and to enter the ship via an airlock, Isaac must throw the radioactive pods into space. The pods are free-floating because the crash caused them to release from a malfunctioning weapon. However, to launch the pods away, Isaac must destroy the six panels which opens a blast door and creates a vacuum. He must also keep the Lurkers and Leapers (Including the Enhanced versions) away.

Once every pod is removed, Isaac is allowed access to the Valor through the airlock and Kendra tells him that the Singularity Core will be in the ship's Engine Room but, due to the massive damage, he may have to find an alternate route to get there. Isaac reaches the area where Pod 47 was docked and Hammond tells him that he encountered a new kind of Necromorph called a Twitcher which was caused when the soldiers of the Valor are infected, their bodies merged with the Stasis Modules in their RIG which made them very fast. Before long, Isaac has his own encounter with the Twitchers when he navigates through some columns by using his Kinesis Module in the Valor's Cargo Bay. Another strange "Make us Whole" message from Nicole appears on the monitor in the Torpedo Room and Hammond overrode all of the locked doors when he reached the Valor's Bridge. While riding an elevator, Isaac is contacted by Dr. Kyne―a man who Isaac knows of through various logs. It is evident that Kyne was the one who was listening in on Isaac and Kendra's conversation because he knows who Isaac is and also knows about the shuttle that they are attempting to repair. Kyne wants Isaac to use the shuttle to return The Marker back to Aegis VII in order to stop the Necromorphs for good rather than using it simply to escape.

Isaac kills a Divider and some Exploders before entering the Armory which contains the Shooting Gallery. The next room on the way to the Engine Room is the Infirmary but when Isaac passes the hallway connecting the Armory and Infirmary, a soldier hugs his severed leg before dying. The surgery laser in the Infirmary is malfunctioning, which requires Stasis in order to pass safely. More Twitchers and Exploders attack when Isaac enters the crew Barracks. The Engine Room turns out to be made of two rooms: The Drive Deck and the real Engine Room; when Isaac eventually reaches the Drive Deck, a large collection of Necromorphs attack him including Pregnants because a temporary lockdown was initiated. At the back of the room is a text log from the Chief of Staff of Earth Defense to Commander F. Cadigan―the captain of the Valor. The message reveals that they are both well aware that The Marker (referred to as Marker 3A) is on board the Ishimura and that the Valor was deliberately sent to retrieve it by any means necessary. Ironically, the Valor only became aware of the Ishimura's location once Isaac sent the distress call.

Isaac reaches the Engine Room in time to see a fleeing soldier. The room is divided in two by a glass panel with an elevator leading to the top undivided level of the room. Isaac takes the elevator up and uses a capsule to shield himself from the malfunctioning engine blast with Kinesis while disabling six panels. Once the six panels are offline, the blasts stop and Isaac can take the Singularity Core. Kendra tells him to get to the Ishimura Crew Deck as the Valor's engines go offline. Isaac takes a flight of stairs down to the far side of the lower level of the room and meets Hammond on the other side of the glass. However, an enhanced brute pins Hammond down, pulls off his leg, crushes him to death and smashes the glass panel. After avenging Hammond, Isaac makes an abrupt escape from the Valor as it gradually explodes due to a catastrophic failure of fuel containment. Luckily, Isaac returns to the Cargo Hold in time and takes the tram to Crew Deck. 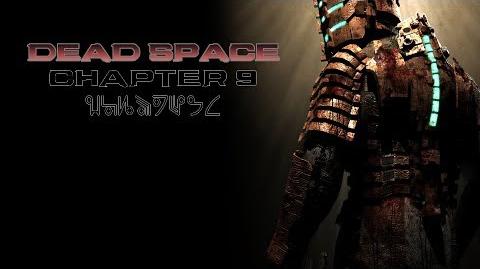