Déjà Vu on the Ishimura
Dead Space Wiki doesn't currently have a walkthrough for this level, could you write it?

Chapter 9: Transportation Preparation is the ninth chapter of Dead Space 2.

This chapter spans the latter half of Fuel Processing, as well as the Industrial Transport rail.

In this chapter, Isaac must repair the Industrial Transport in order to get to the Government Sector.

Isaac finally meets up with Stross and Ellie after traversing the main CEC facility. Ellie tells Isaac that they can exit the facility using the industrial transport, and Isaac volunteers to head to the gear house to deploy it. Isaac ascends the Fuel Pressurization Tower level-by-level encountering several varieties of the necromorph form. When he reaches the gear house, he finds that the release mechanism has been, surprisingly, destroyed and he has to fix it. After Isaac fixes it and boards the tram, he is met by a hallucination of Nicole asking Isaac who she is; Isaac says he will not give in and that he knows she's not real. After Ellie and Stross get on the tram, Stross stares at Isaac then hallucinates of his dead son and yells at him to stop staring. Isaac then notices the USG Ishimura for the first time, at which point Ellie claims she heard it was attacked by terrorists. Isaac then tells her what really happened. Unfortunately, they subsequently find that the track ahead of them is blocked, and Isaac alights from the tram to find out what the problem is. He discovers that two large tentacles are blocking the path of the tram in the Fuel Mega Storage room. He destroys the first tentacle by blowing up a Nitrogen Trichloride tank. He destroys the second by the same method, although he is simultaneously attacked by Tripods. The explosion cased by the second tank causes a chain reaction of explosions of other tanks and Isaac runs back up to the tram so that they can escape before the whole factory is destroyed.

Tiedemann locates the trio and uses the Solar Beam to cut the track in two. Isaac reluctantly decides to board the USG Ishimura and use its gravity tethers to hold the track together so that the tram can cross over to reach the Government Sector.

This chapter is the first time you will fight a whole Divider and also the last chapter in which you face Tripods. 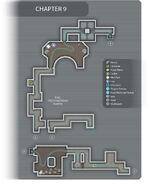 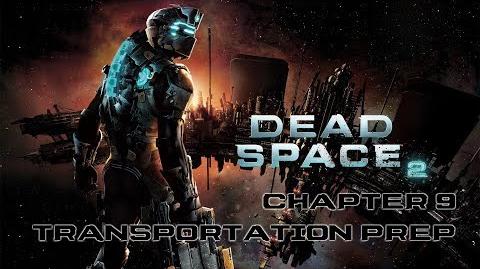