"USG Ishimura, this is the emergency maintenance team of the USG Kellion responding to your distress call. Come in Ishimura."
—Chen[1][2]

Corporal Chen was the pilot of the USG Kellion and a member of the shuttle's security detail.

Chen was the first individual to communicate to the USG Ishimura. He was able to successfully crash land the Kellion aboard the Planet Cracker despite a failure in the auto-docking procedure.

Chen, along with the other members of the team, reached the Flight Lounge, only to find it deserted. While the group was trying to understand what had happened to the ship's crew, a quarantine procedure was automatically started by the Ishimura's central computer, causing all lights to turn off. Immediately after that, a Slasher entered the room via the ventilation shaft and killed Corporal Johnston by decapitating him: Chen and Commander Zach Hammond immediately opened fire on the creature, but another Slasher entered the Lounge and killed Chen, pouncing on him and biting him in the throat. He was the second crew member of the USG Kellion to die during the Second Aegis VII Incident.

By the time Isaac Clarke returned to the Flight Lounge, Chen's body had already vanished along with Johnston's, suggesting he had been transformed into a Necromorph. It is also possible that Isaac later had a hallucination of Chen at the Bridge, near the Communications Array. Isaac briefly saw a bloodied officer asking him to "make us whole again" and disappearing shortly after; it is fitting to see a hallucination of Chen near the Comms Array, since Chen was a communications officer. 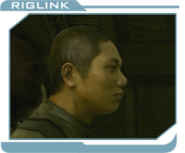 A side portrait of Cpl. Chen.

Possible hallucination of Chen during Chapter 4.