"The Codex. It's the key to saving everything!"
—Earl Serrano[1]

The Codex was a man-made device created by the S.C.A.F. in a move to stop a Convergence Event by preventing the spread of the Marker signal perpetuated by the Moon.[2][3] It was built to work in conjunction with the Machine buried in the alien ruins beneath the surface of Tau Volantis.[4][5]

On June 18, 2314, Tim Caufman and Sam Ackerman are sent by Dr. Earl Serrano on the final day of a facility wide outbreak and cleanse order to locate the Codex. Tim found the Codex lodged within the main module of a crashed ship and after fighting his way through a horde of Necromorphs, rapelling down a cliff and dodging the debris of the falling vessel (Sam being crushed by debris), he found himself within an encampment in the base, only to see that all of his comrades committed suicide as part of the final containment protocol. Tim encountered General Mahad who was convinced that Dr. Serrano was far too optimistic and that in order to prevent the Necromorphs from escaping the planet, everyone must die. Mahad killed Tim and purged the Codex of its information, following by committing suicide. At some point before (Presumably by Dr. Serrano), a new Codex was placed in the workstation of the Rosetta Lab to be used in the future in case that he failed.

In 2514, Isaac Clarke and his team discovered aboard the CMS Roanoke a major clue suggesting a way to turn off the Markers when he and John Carver investigated the Admiral's Quarters aboard the derelict vessel. The Admiral was driven mad by the Markers influence and was desperate to create a "key" to a Machine that would turn them off which she hoped that it would stop the torment that was being afflicted onto her mind. Isaac and his company followed this clue in the belief that Tau Volantis was the Marker Homeworld and down on the surface they would find the answer that they sought.

After facing off head to head with both Necromorphs and The Circle, Isaac and his group eventually discovered that the source of the key could be found with research pertaining to a woman named Rosetta to which they discovered that she was not a person, but a preserved corpse of an alien researched at a facility within the colony. Within the facility, they discovered that they are able to craft a key from the mental capabilities of Rosetta by reassembling her separated body and probing her mind of its information. From the memories of the alien creature, they found out that the key powered an Alien Machine that was activated to stop a Convergence Event from finalizing a Necromorph Moon and if the Machine was turned off, the Convergence Event would continue, completing the monstrosity.

It is not long until Jacob Danik, leading the Unitologist group who are in opposition of Clarke and his team intercepted the key that Clarke crafted with the hopes of turning off the Machine and releasing the Moon as he believed that it was a divine being. Despite initially succeeding, Isaac was able to use the Codex to complete the Machine and kill the Moon. But it was already too late, and the Moon already contacted its dormant brethren throughout the galaxy to invade Earth.

The Codex after General Mahad purges its information. 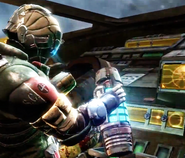 Tim Caufman with the Codex.

The Codex being used to complete the machine