Husband of Jennifer Barrow
Brought infection aboard the USG Ishimura

"This is deep space - weird shit happens. The faster we do our jobs, the faster we get home."
—Barrow[1]

Colin Barrow was the Dig Foreman of the CEC mining colony on Aegis VII and the husband of Jennifer Barrow.

A skeptic when it came to Unitology and supernatural phenomena, he refused to treat the Marker as anything more than a simple rock and the disturbances on the colony as nothing more than "weird shit". A devoted husband, Colin was highly protective of his wife to the point where he made sure that she stayed at home after she began to develop the same dementia as the rest of the colony.

In addition to leading up the preparations for the planet crack, Colin was also charged with removing the Marker from its pedestal and bringing it into the colony. Despite his skepticism, he too noted feeling a moment of extreme discomfort when the Marker was removed, though it did not seem to affect his appraisal of the situation on the planet.

During the blackout on the colony following the planet crack, Colin was piloting a shuttle from a great distance from the colony sparing him from the initial slaughter by the Necromorphs there. Upon landing, he found the Corruption forming on the halls, but paid no mind to it and immediately sought out Jennifer to ensure her welfare. On his way to his quarters, he found the aftermath of the infection and lingering Necromorphs. Horrified, he frantically ran to his quarters. Upon reaching his quarters, he found Jennifer in a catatonic state, deeply cutting herself with her own fingernails and covering the room with Marker-related symbols. Seconds later, Jennifer activated a Rock Saw and committed suicide by slitting her own throat.

Colin, refusing to accept his wife's demise, moved her body onto his shuttle and took off for the USG Ishimura to escape the doomed colony, unaware that an Infector had snuck on board. Determined to reach the ship, he refused to comply with all orders to return to the planet, maneuvering his shuttle to land in one of the ship's docking bays. Activating the port boosters in order to land inside the docking bay before the bay doors closed, he was attacked by his reanimated wife just as the shuttle made it past the closing bay doors and crash landed.

The amount of blood in the shuttle and the absence of any bodies suggested that he was killed and transformed into a Necromorph.[1] 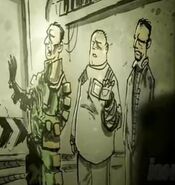 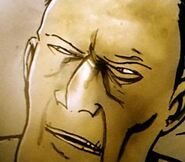 Colin looks down at his deceased wife.

Colin looks to his side and sees his reanimated wife.