Reanimated babies with explosive sacs in their stomachs

"Come to mama! Yes... yes, that's it. Come to mama, oh, right up here!"
—A woman's last words before getting blown up by a Crawler

Crawlers are Necromorphs formed from human and alien infants. They are first introduced in Dead Space 2.[1][2][3]

Crawlers are a variant of Necromorph that are created from reanimated infants, much like the Lurker, but serve another function. The torso is grossly enlarged, with an organic explosive substance under its skin. The body and head are twisted backwards, so that the Crawler can move with the sac pointed upwards. The arms and shoulders are twisted backwards with the fingers mostly fused together on both hands with a hospital identification bracelet on the left wrist, the legs are almost twisted and fused together with only a visible left foot, giving the Crawler an almost caterpillar-like movement. Oddly the crawlers head and face appear like normal babies, with the exception of over swelled blood vessels around the eyes and forehead, they have visible teeth that look like regular baby teeth on the bottom jaw but the top of the jaw has peg like pointed teeth. crawlers eyes also a sickly gray color with no iris or pupil. Crawlers tend to slip while moving, tumbling about for a few seconds before resuming their attack on Isaac.

In Dead Space 3, Crawlers are now reanimated alien infants, spawned by Alien Necromorphs. They have the same characteristics of the human Crawler, except in physiology, movement, speed and sound.

"They're EXPLODING! Get away!"
—A Circle soldier after encountering a swarm of Crawlers

A female survivor hugging a Crawler, seemingly unaware of its suicidal nature. 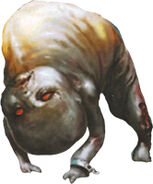 Concept art of the Crawler. 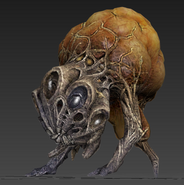