This article (Creeper and Shambler), has one or more disputed facts. Please visit the Talk Page for more info, and clean this page so it meets wiki standards.

Maintains a rough human appearance, save head which is skeletal in appearance.

The Creeper uses the bodies of dead humans and reanimates them; it can attack wielding guns.

If the Shambler sustains enough damage, it will take the Creeper from its body and throw it at players, immediately triggering the QTE if the player doesn't dodge the head in time.

"We're getting slaughtered here! We need reinforcements—wait! What the hell is that?!"
—A Unitologist soldier just before getting killed by a Creeper

The Shambler is a new variant of the Divider, encountered only in Dead Space 3, created by disembodied Divider heads, now called Creepers.

The "Creeper" is a new name applied to the head of a Divider, similarly to the way female Slashers were renamed Spitters in Dead Space 2. Featuring an elongated tongue and three tendrils coming out of the neck, Creeper heads are capable of decapitating dead bodies and burrowing into their neck stumps to create "Shamblers". Shamblers are dead soldiers or Circle terrorists with firearms in their hands. They can attack from a medium range, however, being undead, Shamblers have incredibly poor aim, making it significantly less of a threat than regular human enemies.

If the Shambler body is sufficiently damaged, it will rip the Creeper out and toss it at Isaac/Carver, initiating a quick-time event if it hits them. If the thrown head was dodged, and hits a wall/solid surface, it will become momentarily stunned, allowing the player to finish it off.

Concept art of the Creeper 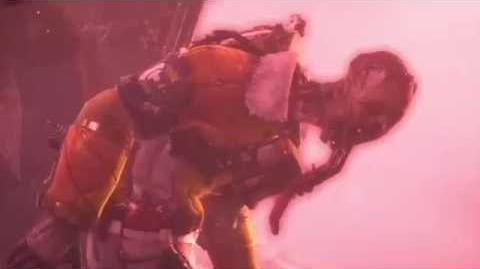