The Cyst is a stationary Necromorph variant, first encountered in Dead Space 2.

Cysts appear to be growths of the Corruption that serve to kill targets moving through its immediate vicinity. It is capable of excreting organic bombs that will explode violently upon impact. Though effective as area-denial defense, they are not capable of distinguishing between human hosts, inanimate objects and Necromorphs, and will eject their bomb should anything come within range, Necromorph or not.

The Pods that the Cyst ejects can be grabbed in air with Kinesis; the Pods can then be launched back at the Cyst, or any other object or Necromorph.

In Dead Space 3, within the ruins of ships around the CMS Terra Nova and the CMS Brusilov, there is an extremely large variant of the Cyst. In the Awakened DLC, there is yet another variant of the Cyst encountered inside the CMS Terra Nova's power core. These Cysts are the same size as the ones encountered out in space are apparently indestructible. They don't seem to generate and spit out their bombs when the gravity inside the core is still on.

The Cyst does not have a death scene of its own, but should Isaac/Gabe/Carver get hit by a cyst bomb explosion while low on health, he will be thrown backwards completely dismembered. If Isaac gets killed by a cyst bomb flying through Zero-G, he will be killed with his limbs and head popped off and flung away at great velocity. 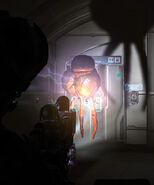 Cyst as it appears in Dead Space 3.

Early prototype model and textures of the Cyst