"You're a dangerous secret, Isaac."
—Daina

Outbreak on the Sprawl[]

Prior to the Necromorph outbreak on the Sprawl, the Unitologists on Titan Station planned to release Isaac Clarke from his EarthGov enforced stay in the asylum with Daina spearheading this effort.

Daina and Tyler Radikov are among the Unitologists who participated in the sabotage of the Government Sector[1] and the provision of false information to recent Unitologist inductee, Karrie Norton (Codenamed "Vandal"). The crossover tubes opened and the Necromorphs are set loose on the station. Daina contacted Norton, thanking her for the spread of the infection, believing that her death at their hands would be "glorious."[2]

Shortly after the station was overrun, Daina and the Unitologists set their plans in motion. Franco Delille freed Isaac and he tried to warn him about his current predicament only to be killed by an Infector. Daina, monitoring Franco's progress, urged Isaac to run before the Necromorphs in his area could kill him. Contacting him directly, Daina offered her assistance in Isaac's escape, promising to cure him of his dementia.

Isaac's initial behavior was uncooperative and Isaac spurned her help and Daina left him on his own until, following an encounter with multiple Necromorphs, he contacted her, reluctantly admitting that she was his best chance to escape the station alive. Daina explained to Isaac what happened for three years that he was on the Sprawl. He was a target of Hans Tiedemann who wanted him dead for his connections to the incident on the Ishimura and Aegis VII.

Daina led Isaac from the Titan Memorial Medical Center to the Cassini Towers where he began to suspect her intentions as he travelled deeper and deeper into the Titan Station Church of Unitology. Isaac hesitated, believing the Church to be a dangerous location. Daina, unhappy with his continued behavior reminded him that she lost a brother saving him[note 1] and knew that her plan would work. She directed him to a safe room in the complex and waited for his arrival.[3] Daina revealed nothing about her intentions until Isaac reached the rendezvous point and two of her men apprehended him.

Within her grasp, Daina revealed that the "cure" for Isaac's dementia was a ruse to lure him to her.[1] Unlike Tiedemann and the Earth Government who wanted the likes of Isaac and Nolan Stross dead, Daina and the Unitologists needed him alive to maintain the "blueprint" that the Red Marker imprinted on his mind in order for the Church to create their own Markers.

After revealing her plans to Isaac, an EarthGov Gunship destroyed the shuttle docked outside and proceeded to penetrate the room's containment glass. The gunfire from the ship dismembered and killed Daina and her accomplices, allowing Isaac the chance to escape from both groups.[4]

Isaac looks on as Daina is slaughtered.

Isaac receiving a message from Daina. 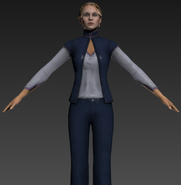 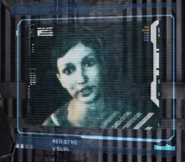