Dead Space: Aftermath is a full-length animation feature released on January 24, 2011. Comprised of both 3D and 2D animation (the latter in a similar style to Dead Space: Downfall) the film explains the truth behind the events that happen directly after the events of the Dead Space. The setting of Aftermath is aboard the ship USG O'Bannon which is sent to Aegis VII to stabilize its gravity and secretely search for fragments of the Marker.

Aftermath centers on the Aegis VII disaster and explores how the Government sends an unwitting crew of people to get exposed to Marker shards. The Government is secretly trying to produce a viable "Marker blueprint" carrier no matter the costs"[2]

The EarthGov interceptor ship USM Abraxis portals to and docks with the O'Bannon. Five Marines board the ship and see dead mutilated bodies. Their scanners detect four people still alive in engineering. The Marines make their way to engineering and meet the survivors: Nickolas Kuttner, head of security; Alejandro Borges, an engineer with a robotic arm; Nolan Stross, chief science officer; and Isabel Cho, a doctor. Kuttner kills one of the Marines after screaming something about his daughter. The Marines incapacitate them and take them to the Abraxis. The Abraxis then destroys the O'Bannon and portals out of the Aegis system. The four find themselves in a holding cell on the Abraxis, heading to the Sprawl, a station on a shard of Titan. The head interrogator is told by the Overseer he has seven hours to get information from the survivors.

Kuttner is interrogated first. They use his fear of being burned alive to get him to cooperate. Kuttner's daughter, Vivian, was killed prior to the mission. He was in a conference room with Cho, Stross, a soldier named Rin and their leader Sergenko. Borges enters the room with his 19-year-old cousin Noah and Omar, a Unitologist. All three were picked up from the Sprawl. Captain Campbell enters and explains that crews will stabilize the gravity on Aegis VII, then dismisses the engineers. Campbell explains that Kuttner's crew are to bring back surviving pieces of the Marker, which are worth millions of credits. The crew and engineers land on Aegis VII, which has become dangerously unstable. While the engineers work on the gravity stabilizer, Kuttner's crew splits up. Kuttner finds a shard of the Marker which has a terrible effect on him. It causes him to see a vision of his daughter. His hallucination of the crew as monsters trying to hurt her causes him to attack the engineers. He kills Noah and causes the stabilizer to malfunction, and his teammates tie him up in the shuttle. He is unaware of what he has done.

After giving his account, the restraints are removed. Kuttner kills several crew members before he is shot. He sees his daughter walk through an airlock. As the Marines attempt to grab him, he opens the airlock, killing himself and the Marines.

They bring in Borges, who explains the crew made it to the shuttle, but Rin, Sergenko and Omar were killed. Borges was forced to crash-land the shuttle onto the O'Bannon. Aegis VII explodes seconds before the ship can portal-jump. The debris causes severe damage to the portal jump drive. Borges, enraged by his cousin's death, demands to know the importance of the shard. When the captain explains the shard's monetary value, Borges assaults him. After Cho and Stross calms him down, he follows the captain's order to fix the portal jump drive.

After giving his account, the lead interrogator assures Borges he will go home. He has Borges killed. He sends in Stross. Stross' account begins after getting the shard on the ship. Stross was on the O'Bannon with his wife and son, but his duties were taking a toll on their relationship. He begins to study the shard, which begins to affect him in the same manner as Kuttner. He sees symbols everywhere and begins to obsess over the Marker. He explains to the captain how the Marker was possibly designed by a higher power; and how it takes dead flesh and restructures the DNA, improving upon it. To prove this theory, he takes a body from the morgue and exposes it to the shard. The corpse transforms into a Necromorph and begins killing and transforming crew members throughout the ship. Stross runs to his living quarters and kills his wife and son, thinking they are Necromorphs. The head interrogator, realizing that Stross can communicate with the Marker, has him stored.

It is discovered that Cho was having an affair with Stross, and she had fallen in love with him. She noticed changes in him after he began to study the shard. After having sex with him in the lab, they have an argument and he tells her to leave. After checking up on Kuttner, she and several other doctors arrive at the morgue. They find the bodies gone and several doctors killed. One of the bodies turns into a Necromorph, causing the group to flee. She releases Kuttner who kills the Necromorph. She goes to Stross' living quarters, and see he killed his wife and son. They eventually meet up with Captain Campbell, who is fighting the Necromorphs with the security team. The Necromorphs overwhelm the last of the security, and the Captain, Kuttner, Cho and Stross flee into the vents. They make it to Stross' lab, where they meet with Borges and two officers from the bridge. Stross explains that destroying the shard could stop the Necromorphs. Borges says that throwing it into the portal drive could not only destroy it, but restart the drive. With weapons made by Borges, they head to engineering. Debris from the planet causes a hull breach, damaging the outer door control for engineering. Captain Campbell sacrifices himself to seal the door manually. The four survivors battle the Necromorphs to get to the portal drive. When Stross refuses to throw the shard into the drive, Cho punches him and throws the shard herself. The drive starts and the energy kills the Necromorphs.

After giving her account, Cho is informed that the USM Abraxis has reached the Sprawl. Cho surmises that her superiors are aware of the effects of the Marker and are using those exposed as human guinea pigs. The Overseer accompanies Cho to the Sprawl and has the interrogator and his assistant killed. The Overseer offers Cho a position as head of the project, but Cho refuses after seeing what her superiors have done. She is strapped to a bed where an automatic drill comes into the camera, which presumably lobotomizes her, as she is seen in later footage with a touch of blood in the center of her forehead and a vacant expression on her face.

The Overseer and his assistant watch a news report where Cho is accused of being a terrorist responsible for the USG Ishimura, Aegis VII colony and USG O'Bannon disasters. They also discuss studying Stross and a crazed man they found weeks earlier on a shuttle, Isaac Clarke.

There are several previously unseen Necromorph forms, these forms have no official names. 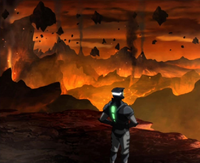 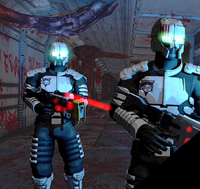 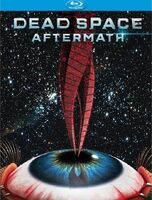 Concept of the USG O'Bannon's bridge