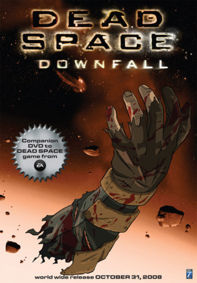 Buy this from Amazon

Dead Space: Downfall is the animated horror prequel to Dead Space, taking place during the events of Dead Space: Extraction and Dead Space comic. It was developed by Film Roman and was released on October 28, 2008 for Blu-ray and DVD. It shows the events leading up to the beginning of the Dead Space game and how the Necromorph infection spread to the USG Ishimura from the mining colony on Aegis VII.

A screen crackles to life as an exhausted Alissa Vincent gets in the chair in front of the recording device, explaining the fall of the Ishimura due to an infestation of parasitic alien-organisms possibly brought about by the disturbance of an "Artifact" and tells the recipient of the message that the Ishimura and the artifact must be destroyed. The Message ends.

Going back in time, three patrolling inspectors in RIGs move to inspect unusual seismic activity on the planet surface. One of them notes chemical weathering on the walls and another takes note of what appears to be a claw mark. They discover an object referred to as the "Artifact" on the planet's surface, it is later brought aboard the Ishimura by orders of Captain Matthius and Dr. Kyne. A week passes and a rash of violent attacks between the miners and other crew begin to rise in numbers. Hostilities begin to break out as members of the religious group, the Unitologists, beg for a glimpse of the Artifact, a key icon in their religion.

Meanwhile, on the planet, two miners, one named Colin Barrow, investigate an outpost that has gone silent while the Ishimura brings up a chunk of the planet for mining purposes. Shortly after arriving, the men discover that something is amiss and one goes out in search of his wife, while his partner eerily vanishes during a quick blackout. In his wife Jennifer's room, Colin watches in shock as she cuts into her throat with a Laser Pick shortly after muttering how "they want our bodies". As Colin flees the facility with the body of his dead wife, he is unaware of an alien presence flying into the closing shuttle door and attaching itself to his deceased wife.

On board the Ishimura, Alissa Vincent, head of the security on the ship, demands that Matthius allows an investigation of the recent outbreak of violence, but Matthius remains firm in the belief that nothing is amiss. Suddenly the vessel piloted by the surviving miner crashes into the hangar just as he cuts communication and is killed by his mutated wife. Vincent and her team are dispatched to contain the situation but discover no bodies on board the shuttle, though they do take note of the copious amounts of blood, then depart to find out what caused the crash.

Down in the sickbay, a man awakes to discover alien creatures mutating the various corpses in the morgue, only to be gruesomely dispatched moments later. The situation turns grim all through the ship as the chaos and body count steadily rises, creating havoc as Matthius demands order. A confrontation between Matthius and Kyne leads to the former being accidentally killed by a sedative needle driven into his eye by the good Dr. Kyne, who then flees in terror. Vincent and her team arrive at the morgue where a recently mutated corpse kills a teammate before being dispatched.

Things become chaotic as Vincent and her team struggle to make their way back to safety, but are confronted by a horde of mutated crew members. When it looks like conventional weapons are useless, a man named Samuel Irons arrives on the scene with a mining tool and easily cuts down the creatures. Unfortunately, a member of the team named Hanson goes insane from the chaos and kills his teammate Shen, after which Hanson and Vincent have a brief fight ending with Hanson being shot through the head by Ramirez. Returning to the deck, Vincent, Irons, and remaining teammate Ramirez discover that Dr. Kyne has overridden the ship's gravitational controls and is planning to crash the ship into the planet below.

Along the way to confronting Kyne, Vincent and the others discover survivors being attacked by Necromorphs and go to save them. Using himself as bait, Irons buys time for Vincent and Ramirez as they extract the scared crew members before being killed and turned into more Necromorphs. Unfortunately the survivors are overwhelmed off-screen by more of the creatures and Ramirez sacrifices himself to give Vincent a head start for the control room where Kyne is hiding. Vincent confronts Dr. Kyne who claims he has done what was necessary and steals her weapon as she tries to save the ship.

All seems lost and Vincent finds herself surrounded by numerous Necromorphs. She then discovers that the creatures cannot come into close proximity with the artifact, but the hopeless Vincent doesn't care and breaks down. Spurred on by a brief vision of Ramirez, Vincent leaves a video log that both details the entire ordeal up until now and warns that the Ishimura and the artifact must be destroyed, and uploads the log to a distress beacon nearby on a downed shuttle. In a final act of heroism, Vincent charges through the Necromorph crowd and activates the distress beacon as the airlock opens, which sucks out the beacon and the Necromorphs. Vincent tries to hold on a bit more but gets sucked away as well, though it's possible this may have been by choice, as her only options at that point were either to eventually be killed by a Necromorph or staying near the artifact and slowly starving to death.

As the film draws to a close, Vincent's lifeless body drifts into the darkness of space as the song Twinkle Twinkle Little Star plays eerily.

The story ends just as the USG Kellion arrives and prepares to dock on the Ishimura - which is the beginning of Dead Space.

Retrieved from "https://deadspace.fandom.com/wiki/Dead_Space:_Downfall?oldid=151274"
Community content is available under CC-BY-SA unless otherwise noted.