Survival horror
Dead Space is an upcoming survival horror video game remake of the classic 2008 video game of the same name, developed by EA Motive for the PlayStation 5, Xbox Series X|S, and PC on the Frostbite Engine, known to be used on games such as Battlefield, Mass Effect: Andromeda and EA's Star: Wars Battlefront. The game was announced at EA Play on 22nd of July, 2021.

The game brings back Isaac Clarke as the protagonist, surviving the Necromorph outbreak on the USG Ishimura.

Prior to the official announcement, numerous leakers came forward with a rumored Dead Space remake in the works at EA, and that the studio behind the 2020 video game Star Wars: Squadrons would be making it for the Frostbite engine. The game is rumored to be inspired by Capcom's 2019 Resident Evil 2: Remake, to which, likewise, Resident Evil 4 was also one of the inspirations for the original 2008 game.[1]

It is the first game in the franchise to be announced after a hiatus of 8 years since the release date of Dead Space 3 and its DLC, not considering the scrapped Dead Space 4 project. It is also the first game not developed by Visceral Games after their disbanding and a first main game in the series not developed for the Xbox 360 and Playstation 3.[2]

With the power of next generation hardware, the developers are said to be able to expand more areas with more ways than what was technically being limited in 2008 during the original game's launch, while trying to keep the vision for the game the same. Assets are remade from scratch while also reusing some original ones, such as the audio. Improvements to the atmosphere are also being made by bringing new 3D audio technology as well as the dismemberment system with more gore effects.[3]

The game is said to not include micro transactions[4] and may re-use content cut from the original game[5] while removing criticized aspects from the original game.[6] The remake is being led by Eric Baptizat, the same director from Assassin’s Creed Valhalla, whom left Ubisoft in 2020 after 16 years of career there.[7]

In August 6, 2021 the website Games Beat shared allegedly inside information that the game is aiming for a release in late 2022,[8] to which Electronic Arts declined to comment further. When directly asked about the remake, Andrew Wilson, CEO of Electronic Arts, limited himself to only highlight how much it was demanded by the fans, without giving any hints about the development schedule.[9]

Gunner Wright, the voice actor of Isaac Clarke from Dead Space 2 and 3, has been confirmed to reprise his role. The dialogue has been changed where Isaac only speaks when spoken to and in situations that would feel awkward when being silent,[10] possibly similar to how the dialogue was handled in the second game.

In September 10, 2021, the community manager at the time released a short video on the Dead Space sub-reddit showcasing the new Frostbite level editor, which allows the developers to dynamically add detail onto object surfaces.[11] 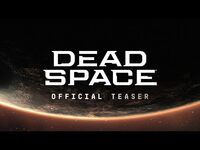 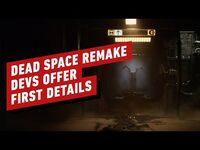 First look of a Slasher 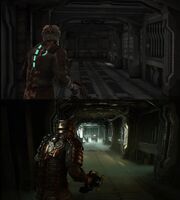