"Detonator Mines are sensor-tripped mining charges that can be placed onto any surface."
—Dead Space 2 Manual

The Detonator is a weapon in Dead Space 2 that deploys laser tripmines that stick onto any flat surface, be it a floor, wall, or ceiling. If the laser sensors are disrupted, the set mines will detonate violently.[1]

The Detonator is described as a trip mine that can be placed onto almost all types of terrain. Once placed, the mines would deploy three trip-lasers that runs infinitely.[1] If the lasers are disturbed, the trip mine will detonate and kill/severely maim anything caught within the blast radius. If the Detonator's mine is not detonated, it can be picked back up after arming to be used at a later time (use the Alt-Fire function while aiming).
The Detonator can also be used as a grenade launcher, the mines fired will explode if they hit an enemy or the surface is not flat/moving with an effect and damage similar to the alt-fire of the Pulse Rifle. also, if one shoots a detonator canister at an enemy in dead space 3, the shot will not explode but will still do lethal  damage as it would in dead space 2.
In Dead Space 3, the Detonator can be crafted with parts, but the Canister Retrieval Module would only reduce planted mines into scrap metal, still wasting ammo. 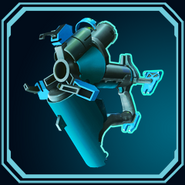 "It's a Trap" achievement/trophy

DS2 variant.
Add a photo to this gallery

Retrieved from "https://deadspace.fandom.com/wiki/Detonator?oldid=149695"
Community content is available under CC-BY-SA unless otherwise noted.