Dividers are tall, thin Necromorphs with the unique ability to break apart into smaller creatures. They are encountered in Dead Space, Dead Space 2 and technically in Dead Space 3 as well, as a new form called Shambler along with its head component, the Creeper.

The Divider in the first Dead Space is composed of deceased high-ranking officers of the USG Ishimura, judging by the tatters of grey clothing. However, the ones met aboard the Titan Station are created from scientists who were wearing a white lab-coat. The major organs have fallen out or been assimilated, along with most of the skin tissue. The limbs have been elongated and become very slender, while the fingers have fused together into elongated claws. Most of the muscle has fallen off, with just enough left to hold the necromorph together. Because the major organs have are missing, the abdomen has been exposed, creating a large hole in the torso.  Despite this, the Divider is an audibly loud creature, emitting deep whale-like bellows when idle and high-pitched shrieks when agitated. The Divider uses a long tongue to strangle its victims, and also uses its arms to slash its victims to death, though it prefers to suffocate them with the tongue from a long distance if possible. The mutation has allowed the arms and legs to become self-aware, able to move on their own once the host body has been destroyed.

The head itself is the main Necromorph. Its arms and legs are used to crawl and leap on different surfaces, as well as to strangle its victims. The head attempts to suffocate the victim by latching onto one's neck and once the victim is weak, it uses its powerful appendages to cut off the head from the rest of the victim's body and hijack it with its arms, taking control of the host's nervous system presumably by attaching itself into the spine.

If the Divider takes sufficient damage, it tries to fool its victim by supposedly collapsing dead on the ground. But the head, arms, and legs separate and become independent creatures known as "Components" or "Divider spawn." The Divider sub-sections are very fast and will damage and attempt to strangle a victim, but they are much weaker than the original Divider.

The arms appear to be snake-like creatures that use their three feet/arms to move. They are able to climb on walls and like to enter vents and attack unsuspecting victims. The feet appear to turn into smaller and slower creatures that have three feet, made from nerves and muscle combinations. They move on the ground and leap onto its victims, providing a powerful punch.

The main purpose of these components is to distract the victim while the head tries to latch itself onto a new host. However, if the head is gone, the rest of the Necromorphs pose a much lesser threat, beyond being difficult to hit due to their small size.

Dividers tend to be loners, but a pair, or a single Divider backed up by Exploders, is not unheard of.

The Divider has two death scenes when it attacks Isaac:

It also has a death scene when it attacks Gabe in conjunction with a Slasher:

As seen in Dead Space 2.

As seen in Dead Space.

Early concept art of a Divider.

Early concept art of a "Divider Slasher", presumably a Slasher that would split similarly to the Divider. 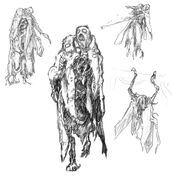 Early looks of the Divider.

More finalized look of the Divider.